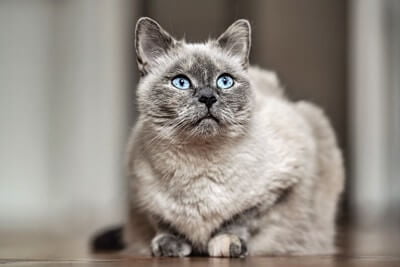 Older cats may breathe heavily while sleeping for many reasons, all related to their health. A normal breathing rate for a cat is 20-30 breaths every minute. Any change in this pace should spark concern in owners. Cats don’t have overly delicate respiratory systems, but they can still develop diseases. Often the first warning sign is how heavy the cat breathes, especially while resting.

When napping or laying down, cats may breathe heavily because of an illness, injury, or foreign object lodged in their throat. Anything that impacts the lungs, heart, nose, or throat may cause the cat’s breathing to change. These problems can include heart failure, cancer, bruises or cuts, infection, and tumors.

A cat’s breathing may turn rapid and shallow when it is overheated and trying to cool down. Cats will pant with an open mouth to lower their internal temperature. Cats will also pant after intense activity or when they are stressed or excited. Their breathing should return to normal after a few minutes.

Why Is My Cat Breathing Heavy While Sleeping?

The respiratory system is an essential part of a cat’s body. Any issues with it will affect the whole animal. If the cat can’t breathe properly, its lungs and heart will be under extra strain. Further complications arise when the body does not receive enough oxygen.

Breathing issues in cats, no matter how small they initially appear, should be addressed quickly. That’s especially true if the cat is struggling to breathe properly while sleeping or resting. This is a sign that there is a serious problem with the cat’s respiratory system that needs to be addressed. There are three types of heavy breathing in cats:

Heavy breathing can be slow or rapid, and it may be accompanied by a variety of sounds or other symptoms. Depending on the type of breathing, it may be a symptom of:

If your cat is severely struggling to breathe, it’s recommended to call your vet immediately.

What Is A Healthy Cat Resting Breathing Rate?

As stated, a normal breathing rate for a cat is 20-30 breaths every minute. The breaths should be a smooth inhale and exhale, with each set counting as a single breath.

Check a cat’s breathing rate when it is asleep or motionless and calm. Count how many inhale-exhale breaths your cat takes over the course of a minute.

The breathing, too, should be near soundless and easy. There should be no sound of strain, bubbling, rattling, coughing, or wheezing. It is normal for a cat to take a deeper breath every now and then. A cat will also naturally breathe through its nose. Open-mouthed breathing is not done unless the cat is:

Tachypnea And Rapid Breathing In Cats

Tachypnea is the medical term given to fast and shallow breathing. This can look like rapid panting, almost as if the cat is frightened or has gone for a run. It may not even be aware that it is breathing in this manner with its mouth open.

A variety of factors can cause rapid breathing, and not all of them are concerning. Let’s discuss what tachypnea looks like. No matter the age of the cat, tachypnea presents itself the same way. Rapid breathing can be open or closed-mouthed, and every breath will be visible. The cat’s sides will rapidly deflate and inflate, and its whole body will sway with the motion.

If the cat’s mouth is open, its tongue may be lolling back and forth, although it will not look the same as when a dog pants. Depending on the cause of the rapid breathing, the cat may also have a blue tint to its gums and inner mouth. This will be matched to lethargy. In part, that is due to a lack of oxygen in the blood.

It is uncommon to see a cat breathing fast and purring at the same time. That doesn’t mean it doesn’t happen, however. Cats don’t just purr when they are happy or content. They purr as a means of comforting themselves as well.

Cats will purr when stressed or unwell as a means of soothing themselves or even promoting healing. The Fauna Communications Research Institute found that the purring frequency of cats aids in the healing of bones and organs. Even if the cat has trouble breathing while purring, it may still do so to help itself feel better.

Why Is My Cat Breathing Fast?

The main reason why any animal pants is low oxygen levels in the blood. Panting allows the respiratory system to exchange carbon dioxide for fresh oxygen rapidly. Unfortunately, tachypnea can also be a symptom of:

In the late stages of heart failure, the cat’s breathing may sound phlegmy or rattling. It may cough to clear its throat. In elderly cats or those with heart conditions, this noisy breathing is a sign the cat is in its twilight days or hours. Organize euthanasia with your vet soon as the cat is liable to drowning in its own fluids.

Tachypnea can look like panting. It is uncommon for cats to pant with their mouth open when suffering tachypnea, although it’s not unheard of. Monitor your cat for 10-15 minutes and ensure the room isn’t too hot. If its breathing has not returned to normal, it’s recommended to consult a vet for further advice.

Don’t mistake the flehmen response for panting. The flehmen response is when a cat is trying to identify a new or interesting scent. It will scrunch up its face into a snarl-like expression and draw air over the roof of its mouth, where the vomeronasal organ is located.

Closely observe the cat and watch its behavior. Is its nose scrunched up? Is the cat actively showing interest in its environment or an object? Then it’s probably just sniffing around. It should stop within a few minutes.

Cats pant when overheated, excited, or stressed. Cats may also try to cool down through panting when they are stressed or excited, such as during a car trip or after a play session.

Almost every owner will see their cat panting for these reasons at some point. It should cease this behavior after a few minutes. However, if your cat is panting while at rest, there is cause for concern. If it’s breathing abnormally while asleep, monitor it for any other symptoms.

Dyspnea And Labored Breathing In Cats

Labored breathing can be fast, but it is most often slow and strained. The cat’s nostrils may flare open more than usual in its attempts to inhale air. These drawn-out breaths also result in the cat’s belly and chest expanding quite noticeably. To understand the difference, compare your resting breath rate with breathing exercises. Your chest expands quite a bit more when you stretch your lungs to capacity.

Dyspnea can result in a cat breathing through its mouth instead of its nose. This can indicate that there is something physically wrong or lodged in the cat’s nasal passage. However, this is not always the case.

Cats struggling to breathe may also hold themselves differently. A cat may hunch awkwardly and refuse to move. It may also hold its head and neck out to stretch the throat and relieve the blockage.

A key part in identifying dyspnea is the sound your cat makes while breathing. Depending on what is causing the issue, the cat may make wheezing, whistling, or strained noises while trying to breathe. Its breaths may also rattle or sound wet in certain cases. The difficulty breathing and the discomfort from it can make cats very restless. They may also be unable to sleep, eat, or drink.

Why Is My Cat Struggling To Breathe?

Dyspnea is rarely caused by an issue that isn’t serious. As such, the cat should be closely observed and taken to the vet. Breathing problems in cats can be due to:

If your cat allows, you can gently open its mouth and inspect its mouth and throat for a visible blockage. Do not attempt to remove the object unless it is safe to do so. You may push it further into the throat accidentally.

Like with tachypnea, heart failure can cause a fluid build-up that makes breathing difficult. Any condition that impacts the lungs and causes fluids to gather will result in the same issue. This includes cancerous growths and tumors. Sadly, such ailments are more likely in old cats.

Cats can also be born with a condition called megaesophagus. This is a deformity of the esophagus that occurs during development. This is often not diagnosed until the kitten begins to wean from a milk diet to solid foods.

It is easy for these cats to choke or develop lung infections. As noted in Europe PMC, treatment and management of megaesophagus vary from case to case. In general, special food and feeding methods are required to prevent choking from occurring.

What To Do If Your Cat Is Choking

If your cat is choking, it is important to remain calm. Inspect your cat’s mouth and throat for an obstruction. If it is too upset to allow this, don’t force the issue. If the item is a piece of string or something similar, do not pull it out. It may have tangled around something deeper down the cat’s throat.

Regardless of whether you could remove the object, wrap the cat in a towel or put it in a carrier and take it to the vet. A professional will need to ensure that the passage is clear and uninjured and remove the object if it remains lodged in the throat. The cat will likely be sedated to make removing the item easy and stress-free.

In cases where your cat is severely struggling to breathe or unconscious, and there is a blockage in the throat, you can attempt the Heimlich maneuver:

Your cat breathing loudly while resting or asleep isn’t always a symptom of an underlying problem because cats can snore. It can be soft or loud. It can seem like your cat’s breathing weird, but it’s fine. However, snoring can also be a result of issues in the throat, nose, or lungs. Listen closely to the snores for any:

Also, check for coughing or discharge from the eyes or nose. If you are concerned about your cat’s snoring, record it while making the noise and show it to your vet.

Does My Cat Have Breathing Problems?

Noisy breathing in cats can be an indicator of many problems. Labored, heavy, rapid, or strained breathing are often symptoms of an underlying issue. The majority of such issues have mortal consequences, such as with:

In older cats, heart failure often results in noisy, wet-sounding breathing. Cats also breathe rapidly and pant when trying to cool down, or they are excited, much like a dog would after a walk.

If your cat ever seems to be breathing abnormally, monitor it for 10-15 minutes and check for other potential symptoms. If it is struggling to breathe, take your cat to the vet without delay.