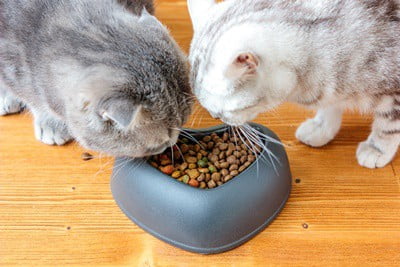 If you have two cats, you’ll need to manage their mealtimes carefully. Some cats have a habit of guarding their food or becoming aggressive as they eat because they don’t want other animals to eat their food. Other cats eat too much or too fast, not allowing the other cat to get any nourishment at all.

Two cats shouldn’t eat from the same bowl because they’re solitary hunters that prefer to eat alone. If cats believe that they have to compete for food, they may develop behavioral problems, such as aggression and greediness. There’s also the risk of cats passing on illnesses and diseases to each other.

Providing two separate food bowls creates a more relaxing eating environment. When cats share the same bowl, one animal usually misses out on its meal to a more dominant, faster-eating feline. Some cats are bullied into submission and may become malnourished and hungry due to a lack of food consumption.

If you have multiple pets, you might be wondering how many food bowls for two cats is enough. It’s common for cats to share food bowls as it’s easier, saves space, and prevents too much washing up. However, most vets agree that cats should have their own bowls.

While it’s OK for cats to temporarily share a bowl if one breaks or you don’t have two dishes. Separate the cats while they eat so that they don’t intimidate each other for food. Similarly, wash the bowl up with soapy water after each meal to ensure that both cats eat fresh food, preventing harmful bacteria and flies from making it moldy.

It’s also okay to leave out one bowl of dry food for your cats to graze on throughout the day. However, for set mealtimes, cats should have multiple food bowls for the following reasons:

In the wild, cats are solitary hunters. According to the MSD Veterinary Manual, cats live in social groups but prey on rodents and other small animals alone. These two things are what enable them to coexist so well with humans.

However, this solitary nature means that cats don’t do well with competing with each other for food when it comes to mealtimes. Cats are hard-wired to eat 6-9 small mice (or similar-sized creatures) throughout the day without sharing with other animals.

Aim to replicate this in your home by providing small meals throughout the day in a quiet location. This will mean your cats won’t feel as if they have to share.

If you feed your cats different foods because of dietary requirements, you must use separate bowls. Put your cats in separate rooms. Special diets are necessary for:

While it’s unlikely cats would get sick from eating dietary food, it won’t benefit them, and the cat that needs the special food will miss out.

Similarly, many medications are mixed into food so that cats don’t know they’re in there, making it more likely the sick cat will eat it. In this case, you won’t want your healthy cat accidentally eating the medicine, which is another reason separate bowls are essential.

Cats pick up sicknesses and illnesses just as easily as humans. If you have more than one animal, there’s an increased chance that they’ll spread contagious conditions onto each other, such as cat colds. Other infectious diseases include:

While it’s rare for domestic cats to catch these illnesses, it can happen. Cats that use the same food bowl are even more at risk of passing them on to each other. Having separate bowls can help minimize the risk, making conditions safer and more sanitary.

All cats are different shapes and sizes, even if they’re from the same litter. Similarly, cats have different energy levels. Some are happy to roam and explore all night and day, while others prefer to spend their time sleeping. This means they need different amounts of food.

Some cats are greedier than others and will eat more food if they have the opportunity to. This will cause your more submissive cat to miss out, potentially going hungry without you realizing it.

A shared bowl is the source of behavioral problems and aggression. While food aggression isn’t as commonly associated with cats as other animals, some felines become angry and irritable when forced to share with another cat.

Sadly, the scientific journal Animals describes how behavioral problems are among the most common reasons their owners relinquish cats to shelters. If they’re not rehomed quickly, euthanasia will likely follow.

However, cats sharing food bowls don’t always fight. Instead, one cat may keep the other away from the bowl. This behavior is called resource guarding. In the worst cases, the cat doing the guarding displays threatening behavior towards the other.

Over time, this teaches the aggressive cat that putting up a fight is a successful way to get what it wants, leaving the other animal left out and at risk of being bullied. Once this happens, many cats attempt to resource guard other things, including toys, territory, and treats, making life uncomfortable for the other animal.

Brachycephalic cats with flat faces, such as Persians and Himalayans, find it more difficult than most to eat from a food bowl. That’s because they have much shorter muzzles and nostrils than other cat breeds, meaning they have to stick their entire heads into the bowl to pick up food. They also use their short tongues as a shovel to get hold of food.

Most flat-faced cats require wide, flat bowls that allow them to pick up food without their delicate whiskers getting in the way. They can’t share a bowl with another cat because they wouldn’t have enough space to eat, causing them to wind up hungry.

Having separate mealtimes removes any fear or aggression and enables cats to enjoy mealtimes without having to worry about what the other’s doing.

Your cat is more likely to take its time eating instead of wolfing everything down, preventing indigestion and stomach pains. Cats that eat too fast are prone to regurgitating immediately afterward, depleting the body of the vital nutrients it needs.

How To Feed Cats Separately

To ensure your cats receive the nutrition they need, it’s essential to feed them separately. This doesn’t only involve providing different bowls – you should physically split them apart, too.

If your cats are in a routine where they always have access to their regular food, you’ll need to put a stop to this. While it can be beneficial to leave a bowl of dry food out, maintaining a strict meal schedule teaches your cats better habits, preventing them from fighting for food.

It might take a week or two to get cats out of the free choice feeding habit, but most animals adjust to it just fine. Before switching to set meal feeding, choose specific times of the day that will enable you to stick to a routine. You’ll also need two find two suitable locations to feed your cats. When feeding your cats, consider the following options:

Which feeding routine you use depends on your cats and the amount of time you have available to separate their routines.

Should I Feed My Cats Separately?

While we’ve established that feeding two cats at the same time can be problematic, there are times when it can benefit the animals. For example, when introducing two cats to each other for the first time, they analyze each other by swapping scents.

You won’t want to introduce them face to face at first, as they might fight or become fearful. But allowing them to use the same food bowl allows the cats to get to know each other through their scent.

However, we’ve established that cats don’t share, so once you’re ready to introduce them face to face, you’ll need to have two separate bowls ready.

Pay attention to how your cats feed at mealtimes. If they become angry and irritable in each other’s presence, feed them separately in different rooms. If they’re happy enough to be in the same vicinity, you’ll only need to keep the bowls apart.

It’s not a good idea to walk out of the room your cats are in when they’re eating. Instead, remain close by to monitor any problems should they arise. There are scenarios when you might need to step in to separate them and keep them to the same bowls, ensuring both animals receive the right amount of food.

It’s more acceptable for cats to share water bowls than food bowls. Cats are unlikely to drink water at the same time. They also rehydrate relatively infrequently throughout the day, getting much of their water through canned wet food. Cats on dry kibble will drink more to stay hydrated, as biscuits contain little moisture.

However, whether your cats are happy to share a water bowl depends on their personalities. Some are okay to share and do so without any issues. Others are more defensive, especially if they’re former strays or rescue cats. You won’t know this for sure until you test your cats by sharing a water bowl.

If your cats share without any problems, you’re safe to let them continue. However, if issues develop, get your cats their own bowls or water fountains. Don’t force them to use the same one. Place each one in a unique spot so that each cat knows which one it owns.

Not only that, but place your cat’s water bowl away from its food to ensure your pets feel calm and protected from rivals.

Why Do My Cats Switch Food Bowls?

If your cats’ food bowls are too close together, your pets may not be able to resist the allure of what’s in the other bowl.

Cats are food motivated and hard-wired to survive. Some cats switch food bowls because they’re scared of not having enough food, which would mean starvation in the wild. Even though domestic cats don’t have to worry about running out of food, their survival instincts are too strong.

Another reason cats switch food bowls is that one usually eats faster than the other. If the bowls are located too closely, the greedier, faster-eating cat will finish its food before going in for more. This causes the slower-eating, submissive cat to give up its food and will go to the other bowl to see if something’s left.

Of course, you shouldn’t allow this behavior to continue, as one cat will miss out on the nutrition it needs while the other is at risk of becoming obese.

While there may be times when feeding your cats from one bowl is beneficial, it’s always best to provide them with their own food dish. The risk of behavioral problems forming is too high, and your cats are at risk of becoming firm enemies if they have to compete with each other for food.