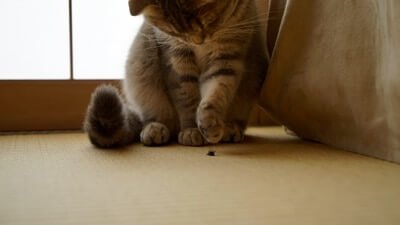 Cats love to hunt. If they see flies in the home, they’ll stalk, chase, and catch them. Some may even eat the fly. While this is unpleasant to humans, cats don’t realize that flies are unsanitary bugs.

While cats won’t die from eating flies, they carry harmful bacteria, fungi, and pathogens that cause infection and sickness. Flies also increase the risk of parasitic worms entering the body. Despite the various health risks, flies are a source of protein, iron, magnesium, and calcium.

While flies may seem like an unsavory food choice, some cats really enjoy hunting, catching, and eating them. Cats can safely digest various unpalatable foods, and flies will rarely cause cats any long-term harm.

Can Cats Eat Flies And Is It Good For Them?

It’s thought that bugs make up to 1/3 of a cat’s diet, so eating flies isn’t something to be overly concerned about.

Flies are a source of the following forms of nutrition:

Like many other insects, such as crickets, flies are a good source of protein. For example, a fly’s larvae are 45% protein.

Comparative Biochemistry and Physiology explains how cats are opportunistic omnivores and adjust their food intake according to the available energy density.

While cats would need to consume many flies to get the protein requirements they need, a small amount of protein is better than none, so flies provide a decent source of animal protein when other, more nutritious foods are unavailable.

If certain amino acids are missing from a cat’s diet, the body can’t function properly. In severe deficiencies, blindness and health problems can develop.

Iron is essential for:

Cats receive all the iron they need through their diet but can become deficient if high-quality food sources are unavailable. As a result, the occasional fly can improve a cat’s iron levels.

According to Plos One, a housefly larvae meal is a good source of calcium. Calcium is an essential nutrient for cats and should make up around 0.6% of a cat’s total dietary requirements.

Calcium works alongside phosphorous to keep cats healthy. As described by the National Animal Supplement Council, cats should have 1.2 parts of calcium for every 1 part of phosphorous.

Calcium is also categorized as an electrolyte, which is essential for the following:

Symptoms of a calcium deficiency include:

As a result, cats receive a small calcium boost each time they catch and eat a housefly.

Magnesium is essential for the secretion of hormones, enzyme function, and healthy teeth and bones. It also allows cats to absorb vitamin C and E, potassium, calcium, and sodium.

While magnesium deficiencies are rare, cats can’t absorb these vitamins and minerals properly, causing other health problems in the long run.

Is It Harmful for Cats To Eat Flies?

Some cats have sensitive stomachs, meaning flies cause health problems, including sickness and diarrhea.

According to Cornell University, house flies carry and transmit more than 100 human and animal diseases.

To get rid of flies, many homeowners spray them with toxic insecticides. Unfortunately, flies don’t always die straight away, increasing the risk of cats eating infected flies.

According to the Cat Protection Society of NSW, permethrin poisoning is one of the most common causes of poisoning in cats worldwide. It’s found inside many insecticides and fly sprays.

When cats come into contact with the toxin by eating an affected fly, they can’t metabolize it. As a result, the poison affects the cat’s nervous system, causing it to shut down.

Signs of insecticide poisoning include:

When poisoned cats are taken to a vet quickly enough, they make a full recovery. However, if the poison is left untreated, it’ll kill the cat.

While this is worrying, the likelihood of poisoning is rare, as flies only need traces of poison in their systems to die. It also depends on how many poisoned flies the cat eats.

Flies feed on waste and decaying matter, ingesting liquid food and vomiting on solids to liquify it. As a result, flies pick up, carry, and transmit a range of bacteria, fungi, and pathogens that make cats sick.

Houseflies carry the following bacteria, which are capable of causing diseases that are harmful to cats:

These cause infections that make cats sick. As a result, infected flies are dangerous, and it’s not possible to know whether the fly your cat has eaten is free from pathogens or carrying something harmful.

If your cat has a sensitive stomach or an underlying health issue, flies can make them vomit. It can also give them unpleasant watery diarrhea due to the pathogens they carry.

Sometimes, the sickness clears up on its own within 24 hours but, if it doesn’t, the cat requires urgent treatment to determine what’s wrong.

Unfortunately, it’s hard to tell what makes your cat unwell without a veterinary examination.

Can Cats Get Parasites from Eating Flies?

Internal parasites aren’t associated with the ingestion of flies, as the chances of cats developing a parasite after eating bugs are small. That being said, eating flies can sometimes result in gastrointestinal parasites, including Isospora.

Isospora is the most common species of coccidia in cats. Coccidia is a one-celled organism (protozoa) that causes coccidiosis, an intestinal tract infection. Flies that carry isospora cysts are one of the most common causes of the condition.

The parasite is often confused with worms because it lives in the intestinal tract. Some cats develop diarrhea, but not all do. As a result, it’s sometimes difficult to diagnose.

Symptoms of coccidiosis include:

Adult cats are less likely to be affected, but it affects kittens badly. Kittens who are infected are contagious and likely to infect the rest of the litter.

Veterinary treatment is sometimes required to remove the parasite from the cat’s system. Beforehand, a vet will take a stool sample and examine it under a microscope to diagnose the infection.

Can Cats Get Worms from Eating Flies?

Worms are commonly transmitted from flies to cats.

Once they’re in your cat’s intestines or stomach, they feed off nutrients, stealing them away from your cat’s body. As a result, worms can make cats seriously ill and malnourished.

When flies eat feces contaminated with roundworm larvae, they can pass them on to cats after being eaten.

Roundworms are brownish-yellow and have round bodies. They can grow up to 4 inches long and spend their lives living in a cat’s gut, feeding on the nutrients.

They lay their eggs in the intestine, which pass through the cat’s feces and become infectious.

Symptoms of roundworm include:

Hookworms are another intestinal parasite that can be transmitted through flies. They use their hook-like mouths to latch onto the intestinal wall’s lining. Here, they feed on the cat’s tissue fluids and blood.

Hookworms are small and aren’t easily detected by the naked eye, making them hard to diagnose. When they detach themselves to move to a new spot, they leave painful ulcers where they’ve previously fed.

Signs of a hookworm infection include:

The infection is usually relatively mild and can be easily treated with deworming medications. Again, these should be given every two weeks to capture hatching larvae.

Also known as Physaloptera, flies can pass on stomach worms to cats. When they get inside a cat’s body, they feed off their nutrients by consuming the tissue or feeding off the blood vessels.

The worms can inhabit various parts of the body, including the lungs and gastrointestinal system. However, they mainly live in the stomach and opening of the small intestine.

Stomach worms are pink to tan in color and reach 2.5 inches in length.

Symptoms of an infestation include:

The only effective way to prevent cats from becoming infected with stomach worms and other parasites is to stop your cat from eating flies altogether.

While cats pick up a range of parasitic worms from flies, tapeworms are the most unlikely. Fleas commonly cause tapeworm after a cat accidentally ingests one while grooming.

However, tapeworms are also caused by the consumption of affected bugs and insects, including flies.

Fortunately, tapeworms are a minor parasite and are unlikely to cause long-lasting damage.

Signs of tapeworm infection include:

Cats with a heavy infestation of tapeworms may vomit live worms. That being said, the parasite is easy to treat with a dewormer.

Can Cats Get Maggots from Eating Flies?

It’s unlikely that cats would get maggots from eating flies. However, cats that chase flies are more likely to suffer from a fly bite, especially if they’re allowed outdoors, and cats with long fur are more prone to this.

In particular, blowflies leave nasty bites and lay their eggs in them. They turn into maggots when the eggs hatch, feeding off the cat’s dying flesh. Maggot saliva also contains a special enzyme that penetrates the skin, commonly causing bacterial infections.

Symptoms of maggots in cats include:

While ingesting flies won’t cause maggots, cats shouldn’t be encouraged to chase flies in case of maggot infections. They’re painful and uncomfortable and can be highly traumatic for cats and their owners.

Cats are expert hunters and will stalk flies until they’re ready to pounce.

While it’s unpleasant to see flies meet their sticky end in the mouths of cats, this behavior is natural and helps felines sharpen their hunting skills.

Toys are a good alternative to hunting live creatures, but cats don’t receive the same mental stimulation from them. Flies are moving things, and cats are hard-wired to chase.

Even domesticated cats have these instincts and display their predatory behavior whenever there’s an opportunity.

Similarly, indoor cats, such as Persians and Maine Coons, don’t have access to mice and birds. When flies get into the house, it’s the perfect opportunity for them to flex their hunting skills and stimulate their minds and coordination.

How To Prevent Your Cat Eating Flies

It’s best to prevent cats from eating flies. While the occasional fly isn’t going to cause too much damage, the risk of parasites and worms alone is enough to render them a health threat.

As a result, you’ll need to find ways to prevent your cat from eating flies. To do so, follow these steps:

The next time you see a fly buzzing around the house, distract your cat with its favorite toys. Predatory toys are best, like fake mice, laser pens, or a feather on a stick.

While playing with your pet, open a window or door, and encourage the fly to exit through it.

Another effective way to redirect attention is to feed your cat treats when flies are around. Your pet will be more tempted by a treat than a fly, which stops it from being hungry enough to want to eat one.

While your cat is enjoying a snack, you’ll have time to get rid of the fly from your cat’s vicinity.

Flies aren’t the most intelligent creatures, so they need a helping hand to leave the house. You can encourage it to fly through an open window or door using a magazine or another obstacle to stop it from flying away.

While you may be tempted, don’t use toxic insecticides around your cat in case of accidental ingestion. As discussed, they can poison cats.

How To Keep Flies Away From Cats

Some homes are more prone to fly attacks than others. If your cat can’t resist the hunt and isn’t deterred by distraction methods, you’ll need to change your tactic to keeping flies away from cats.

To do so, you could:

Following these steps should keep flies away from your home, minimizing the chance of your cat catching and eating them.

As mentioned, flies aren’t healthy for cats to consume. While they have a few nutritional benefits, the cons vastly outweigh the pros.