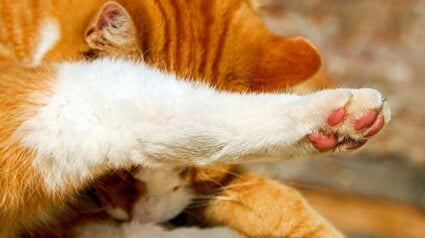 Sudden changes to a cat’s body are not something that should ever be ignored, including color alterations to areas as small as the paw pads. A change to a cat’s paw pad color can be due to a medical problem.

Cats’ paw pads can change color due to injury, trauma, illness, and disease. This could be due to stepping on a piece of glass, being bitten by an insect, burns, and ingrown claws. Other reasons for sudden changes in paw pad color include vitiligo, plasma cell pododermatitis, and anemia.

Most conditions that cause a cat’s foot pad’s color to change suddenly are hard to prevent. However, there are ways to treat footpad injuries that will allow your cat to recover.

Sudden, drastic changes to the color of a cat’s footpad should be checked over by a veterinarian. This includes all paw pads changing to a different color or paleness on all four paws.

Slight discoloration may suggest a less serious problem. Paw pads are prone to injury and cracking in adverse weather conditions. Although relatively common, this can inhibit jumping and movement.

Paw pads act as a cushion, bearing the brunt of a cat’s weight when it runs and jumps. Paw pads add traction to the feet and keep them safe from harm when walking on rough and abrasive surfaces.

There are several types of pads on a cat’s paws: metacarpal pads on the front limbs, plantar pads on the hind limbs, and digital pads on each paw. They are made of fatty tissues (collagen and adipose.)

Other than cushioning and traction, there are other paw pad functions. The paw pad’s ability to absorb shock increases stealth, allowing cats to walk quietly. They can also be used for marking territory.

How Cat Paw Pads Get Their Colors

The color of a cat’s coat and skin is due to melanin, which is the pigment that determines skin color. Since paw pads are skin over fatty tissue, they’ll be the same color as a cat’s skin.

Here are some of the common reasons why paw pads change color:

Vitiligo is a condition that causes the skin to lose its pigment. If your cat’s black paw pads turn pink, your cat may have acrofacial vitiligo.

Vitiligo is a skin condition that causes the skin to lose pigment. While uncommon, it’s one reason why dark cat paw pads can turn a lighter color.

Vitiligo will not harm your cat as it’s purely cosmetic and not painful. However, vitiligo can sometimes be caused by other painful medical conditions.

There are various types of vitiligo, including generalized vitiligo, where patches of white are randomly distributed over the skin. However, acrofacial vitiligo affects the paw pads and body orifices, like the mouth, nose, and anus.

There are two main reasons why vitiligo occurs:

According to the journal Veterinary Dermatology, there are breeds where vitiligo cases have been observed, such as the Siamese breed. It’s believed that these breeds have a gene that leads to vitiligo, sometimes causing cats to turn completely white.

Cats may pass on this gene to their offspring, but it’s not guaranteed. Despite the presence of the gene, a cat may never develop vitiligo, but it can be triggered by stress or injury.

The immune system is responsible for fighting off foreign substances within the body. However, there are instances where the immune system attacks the body itself, which are referred to as autoimmune disorders.

Sometimes these autoimmune disorders cause the immune system to attack melanocytes, leading to depigmentation on the cat’s skin or vitiligo.

Vitiligo may also be caused by stress. Other causes of vitiligo include exposure to toxins and neurological diseases.

Vitiligo starts at a young age. White spots often appear on the face, specifically the nose. This moves on to the lips and the space around the eyes. Then, it’ll begin to affect the paw pads and other parts of the body.

Vitiligo will continue to spread until 3-6 months. The extent of vitiligo will differ from one cat to another but, once the depigmentation stops, it won’t continue.

If your cat has multiple inflamed paw pads with a purplish tint, your cat may have pododermatitis.

Plasma cell pododermatitis is when the paw is inflamed due to plasma cells. This condition is more commonly known as pillow foot due to how a cat’s inflamed paw looks like a pillow.

You can determine if your cat has pododermatitis through a blood test, as cats with pododermatitis have high levels of lymphocytes and antibodies. Your vet may perform a biopsy on the affected foot to rule out other sources of inflammation.

To treat pododermatitis, an antibiotic may be given to your cat. About 50% of diagnosed cats improve after about 2 months of therapy, but antibiotic prescriptions will continue for several months.

Alternative prescription antibiotics will be given for cats that don’t respond to doxycycline.

If your cat’s pink paw pad turns to a pale white, your cat may have anemia. This is a condition where the number of red blood cells decreases.

Red blood cells are important as they carry oxygen to the cells in the body and remove carbon dioxide. With a low red blood cell count, cats can become weak, lethargic, and lose appetite.

The causes include the following:

Your vet will require a complete blood count. This will determine the response of the bone marrow, the condition of the blood cells, and the severity of your cat’s anemia.

Hemolytic diseases refer to conditions that destroy red blood cells. The presence of infectious agents will be tested. If all other causes are ruled out, a test will be done on the bone marrow.

Your vet will treat the underlying issue once the cause has been determined and your cat’s condition is stabilized.

Changes in paw pad colors can sometimes be due to injury, which is often a pink tint or black scabs along the injured area. Once the injury heals, the paw pad will quickly return to its natural color.

Here are the signs of an injured paw pad:

It is relatively easy to determine if a paw pad is injured. Here’s how:

Treatment will require the removal of any foreign objects, such as glass. The wound will then be cleaned.

In the case of burns, wounds should be immediately held under cool running water for 10 to 20 minutes.

In the case of puncture wounds, any discharge will be released. Larger cuts may need suturing, and the wound must be dressed to allow it to heal.

A cat’s paw pads are a vital part of its anatomy. A sudden change of color to a cat’s paw pad can sometimes be a visual symptom of a health issue.