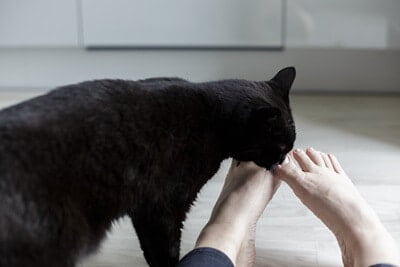 Cats are naturally territorial creatures. Their sense of smell is also far greater than many other animals, including humans, so they can smell much more than we can. This includes unique cat smells and pheromones. As social creatures, they rely on their smell to socialize with each other and learn more about their environment.

Not all cats react to the smells of other cats. Well socialized felines or cats with laid-back personalities are more likely to ignore them. It helps to wash your hands and remove clothing that’s come into contact with another cat, but the pheromones will likely linger for a while.

Table of Contents show
1 Why Do Cats Smell You?
1.1 Happy To See You
1.2 Building Familiarity
1.3 Looking for a Reward
2 Can Cats Smell Each Other?
3 How Long Does a Cat’s Scent Last?
4 Can Cats Smell Other Cats on You?
5 Do Cats Get Jealous if You Pet Another Cat?
6 My Cats Smells Another Cat on Me and Hisses – Why?
7 How To Get Rid of Other Cat’s Scent

Why Do Cats Smell You?

According to VCA Hospitals, cats have powerful scent receptors that are 14 times more sensitive than ours. A cat’s nose has between 45 to 80 million scent receptors, but this number may also be as high as 200 million.

They also have a special organ called the Jacobson’s organ (also known as the vomeronasal organ) that allows them to find undetectable chemical substances with no odor. The organ’s located inside the nasal cavity behind the upper incisors and works as a secondary olfactory system by using nerves that lead directly to the brain.

When a cat sniffs, it’ll display the flehmen response. This is where it curls its lips and opens up the Jacobson’s organ, pushing smells into it. Because of these advanced smelling abilities, cats smell more than owners realize. This is why you’ll find your cat sniffing you, even if your cat already knows you well. Your cat will smell your:

Cats smell their owners for the following reasons:

Happy To See You

Cats that are bonded with their owners sniff them because they’re happy to see them, particularly if they’ve been out of the house all day. As well as sniffing you, a happy cat may rub against your hands and ankles and bunt you with their head. These are signs of affection and endearment.

Cats don’t recognize their owners by how they look – they use their senses. Similarly, cats sniff their owners to build trust and familiarity. Felines use their sense of smell to learn more about their environment and the things within it. Your cat will get to recognize your scent through repetition, so it will sniff you over and over until it manages this.

This behavior also helps reduce stress levels. Once cats have established familial bonds, they see their owners as a source of protection and recognize the environment offers comfort and safety.

Looking for a Reward

Some cats may learn that sniffing you results in a reward. They also smell their owners to detect tasty treats. The more you offer treats, the more your cat will sniff you.

Can Cats Smell Each Other?

We can’t detect the individual smells of cats, but cats can. As Applied Animal Behavior Science describes, cats depend on their smell to detect the world around them. They actually use smells as a way to communicate with one another.

Another way cats smell each other is through their noses. By touching noses, they share their olfactory journeys by providing information about where they’ve been. Cats also smell each other’s noses to determine whether they’re from the same group or not. Cats smelling each other is less about hunting and more about social interactions – which are vital for their survival in the wild.

How Long Does a Cat’s Scent Last?

Cats can pick up the scent from another cat for approximately 18 months. While a cat’s scent is unlikely to remain on human skin for that long due to regular washing, it can remain on unwashed clothes or upholstery for even longer.

Humans may think a squirt of air freshener is enough to remove the scent of another cat from the environment, but your pet will still be able to smell it. If your cat’s territorial, this can cause a great deal of stress.

Can Cats Smell Other Cats on You?

Cats can smell when their owners have been around other cats. Cats have pheromones in their saliva, feces, and urine. Even though you can’t smell a cat’s unique scent, their noses are far more in tune with unique pheromones than ours. This means that if you’ve been stroking an unfamiliar feline, your cat will know.

Unfamiliar cat smells trick cats into thinking they don’t recognize you. They may also feel threatened by the presence of another animal, becoming stressed, withdrawn, and wary of you. That being said, some cats don’t react at all – it all comes down to the animal’s personality and demeanor.

Do Cats Get Jealous if You Pet Another Cat?

Cats are territorial and sometimes become aggressive when they smell another cat on their owner. However, how they react comes down to how bonded they feel with their owners and their overall personality.

Cat experts define jealousy as a type of aggression. This jealousy will become amplified if your pet physically sees you petting another cat – particularly if it’s not in the family.  Cats may exhibit the following behaviors:

You can try washing your hands after touching a different cat, but the pheromones and unique scents will likely linger and upset your cat. Ease your cat’s jealousy by spending more time with it. Give your pet plenty of attention by:

It’s not only other felines that cats get jealous of. They also get jealous of dogs and other small children because they can detect the unique scents of unfamiliar people and animals.

My Cats Smells Another Cat on Me and Hisses – Why?

Hissing is a common reaction to another cat’s smell. This could be due to fear of the unfamiliar smell, or the cat may be exhibiting a defensive response. It’s not uncommon for cats to attack their owners if they can smell another feline on their skin or clothing.

Cats identify their territory by scent, so they’re triggered by smells they don’t recognize. That being said, the more you socialize your cat as a kitten, the less likely it is to become a problem.

How To Get Rid of Other Cat’s Scent

We’ve mentioned how washing your hands immediately after touching another cat can reduce the impact of the scent, but that’s not all you can do to eliminate the odor.

This is important if you had an old cat living in your cat who’s since died, as you’ll need to remove as much as you can of its smell so that your new cat can feel more comfortable. Remove different cat smells with these steps:

Be careful not to use any products that will mask scents instead of removing them. They contain harsh chemicals that can overwhelm your cat’s senses. Instead, choose an enzymatic cleaner that breaks down organic molecules, eliminating the smell. You must also bear in mind that you may never be able to remove the scent of another cat entirely. You may only be able to reduce the effects.

It’s impossible to predict how a cat will react to another cat’s scent until you experience it for yourself. It’s normal for cats to become upset, but you shouldn’t encourage aggressive behaviors, as your cat could start to lash out.