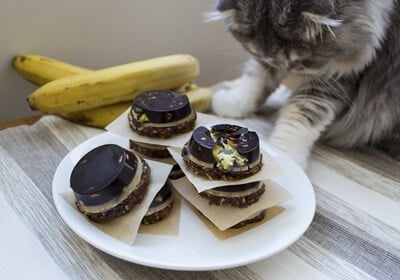 Cats are rarely interested in the taste of chocolate because they can’t taste sweetness. Unfortunately, the distinctive scent can attract the attention of cats, but it must never be fed to them.

Chocolate is toxic for cats due to the theobromine in cacao. The darker the chocolate, the more cacao it contains. Theobromine remains in a cat’s blood for longer, accumulating to dangerous levels. It’s a stimulant that increases the heart rate and acts as a diuretic, both of which can be deadly.

The initial signs of chocolate toxicity don’t show immediately. However, your cat is likely to display some ill effects about 6-12 hours after ingestion. Adverse symptoms can be extreme, ranging from vomiting to seizures to death. So, if your cat eats chocolate, it should be seen by a vet without delay.

Cats are indifferent to the taste of chocolate.

According to PLoS One, cats lack the taste buds to enjoy sweet sensations. So, a cat will experience none of the endorphins associated with chocolate consumption.

Cats may not be interested in chocolate, but the following foods will appeal to cats, including:

Why would your cat care about these foods? Cats are born imitators, so if they see you eating chocolate, they’ll likely grow curious about the flavor and texture.

Also, the scent of chocolate is part of its appeal. While cats can’t taste chocolate, they can smell it, and this aroma may lead to a cat trying this sought-after, forbidden snack.

Next time you have a chocolate dessert or candy bar, close your eyes and take a deep breath. The unmistakable scent of cacao will fill your nostrils, no doubt firing your pleasure receptors.

Now, imagine this experience through the nose of a cat. Your cat’s sense of smell is 14 times better than ours, so it’ll detect fat, dairy, and other ingredients that are more appealing than sugar.

Also, consider the novelty of eating chocolate. As per Comparative Biochemistry and Physiology, feline food choices often revolve around the excitement of a unique sensation. Cats will never have eaten anything that smells like chocolate, so the scent is irresistible.

Is Chocolate Toxic to Cats?

Having established that you need to keep chocolate away from your cat, you may have questions. Key among these will be, “why can’t you give cats chocolate?”

According to the British Journal of Pharmacology, caffeine has a similar impact on cats to humans, acting as a stimulant and increasing adrenaline.

The more adrenaline surges through a cat’s body, the harder its heart will pump. Unfortunately, cats are much smaller than us, so caffeine can have lethal health consequences.

Theobromine is what makes chocolate deadly to cats. The Journal of Small Animal Practice discusses how theobromine can cause a complete shutdown of a cat’s nervous system.

Theobromine is toxic to humans, but our larger bodies and organs can cope better. Theobromine is flushed from the human body before it can pose a problem, but this isn’t the case for cats.

How Much Chocolate is Lethal to Cats?

No amount of chocolate is safe for cats. If you’re fortunate, your cat won’t grow sick if it only eats a small amount. Many cats aren’t lucky enough to escape unscathed from eating chocolate.

There may be times that cats eat tiny traces of chocolate by accident. For example, maybe you’ve been baking and the cat licks cocoa powder from the floor.

For a chocolate-style treat that’s safe for cats, get carob snacks from a pet store.

How To Tell If A Cat Ate Chocolate

Warning signs of chocolate poisoning in cats include:

How Long Before Symptoms of Chocolate Poisoning in Cats Appear?

Not all cats will display immediate symptoms of chocolate toxicity after consumption.

Factors that affect how soon your cat reacts include how much chocolate was eaten, the weight of your cat, its age, and state of health.

Most cats will start to exhibit signs of chocolate toxicity within 6-12 hours. In severe cases, the symptoms can continue for up to 72 hours.

What To Do If A Cat Eats Chocolate

Check for medical emergencies, such as the inability to breathe. If it’s OK, ensure that your cat has plenty of water, but don’t feed it anything else. Keep the cat calm and inactive.

Call your vet, answering any questions as best you can. If you don’t know how much chocolate your cat ate or when it happened, be honest and say that you don’t know.

Once you’ve outlined your cat’s circumstances and symptoms, the vet will advise what to do.

Induced vomiting is the act of encouraging a cat to throw up.

If your cat ate chocolate very recently, it won’t yet be digested. As a result, induced vomiting will flush most of the chocolate from the body before it can do any harm.

Only attempt induced vomiting under the guidance of a vet. Never force a cat to vomit by agitating its throat, as this will result in damage to the throat.

The best way to induce vomiting in cats is to:

A vet may still want to see a cat after you have induced vomiting.

If a cat consumes activated charcoal within an hour of eating chocolate, theobromine will absorb the carbon. In doing so, the theobromine becomes detoxified.

Tinned pumpkin is a natural laxative for cats. Feed your cat a couple of teaspoons, but only if you have permission to offer your cat solids. Be mindful of the side effects of laxatives, including diarrhea.

If you have cats, never leave chocolate or foods that contain chocolate unattended. Cats may be indifferent to the flavor, but it only takes one act of curiosity to cause severe sickness.