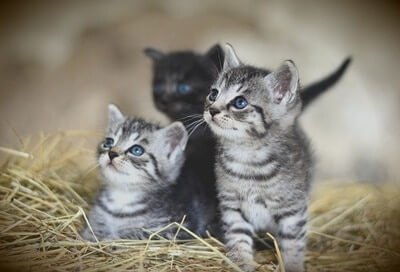 Cats are known to be promiscuous. Female cats (queens) will often copulate with multiple male partners (toms) during a single estrus period. Tomcats themselves are wired to spread their genes as much as possible. As long as they are sexually mature and unneutered, they are always on the hunt for available females. This lack of selectiveness will occasionally make their offspring mating partners.

Cats will breed with their own offspring, though not always. Cats are more likely to mate with distant relatives or relatives one generation apart, such as grandparents and grandkids. Usually, female cats are far more selective when it’s time for copulation. They will try to find other mates if the option is available. If they can’t, though, then they may choose parents or offspring as a last resort.

Not all cat parents will try to breed with their offspring, and it’s difficult to predict if they will. Inbreeding doesn’t guarantee genetic disorders, but it does increase the risks. If it’s between close relatives, there is a strong chance of recessive traits being passed down. While hormones heavily influence a cat’s actions, certain biological factors deter inbreeding. This reduces negative traits from becoming widespread.

Will Cats Mate With Their Own Offspring?

Cats will mate with their offspring out of instinct. Both male and female cats reach sexual maturity between 6 to 18 months of age. At this point, a surge of hormones will encourage them to pass on their genes. The cats will seek out any available mates, so they can create a new generation.

In some cases, the cats will be unable to find unrelated mates. That only leaves family members as an option. They will easily breed with parent-to-offspring, without much hesitation.

With that said, cats do choose more distant relationships if they need to breed. If the option is available, cats are more likely to breed grandparent-grandchild or aunt-nephew. Copulating with direct children or siblings is acceptable, but not preferred.

That’s not because of a moral compass, though. While humans consider sexual relationships between parent and progeny to be wrong, that’s not true for felines. Cats have little trouble mating with their own offspring. As long as they are able to pass on their genes, their mission is accomplished.

If cats are deterred at all, it’s because of their evolutionary instinct to avoid weak genes. Because of this, male cats are more likely to breed with distant relatives. To breed too closely would be to risk developing and passing on negative recessive traits. Cats, like many animals, have a natural (albeit ignorable) instinct to protect their species from this.

Do Cats Breed With Their Offspring?

According to Kyushu University in Fukuoka, Japan, female cats are less likely to mate with cats that are close of kin. This is an instinct found in many living organisms. It’s a prevention method used to avoid the negative effects of incest.

All living organisms with DNA have recessive genes. A recessive gene is a gene that is not inherited by offspring unless both parents have that gene. As an example, we can look at the dilute modifier gene. This dilutes dark colors into lighter colors. Breeders use it to produce various shades of brown and caramel in cats.

The narrower the gene pool, the more likely it is for parents with recessive genes to breed. This makes it very dangerous for the next generation, since all these traits have serious effects. They can:

Will A Cat Mate With Its Offspring?

Since recessive genes are inherited, closely related families are more likely to have the same recessive genes. After all, they’re very genetically similar. Most mutations, especially bad ones, are recessive. Of course, nature tries to avoid inbreeding in animals by making sure they are biologically unattractive to their close kin.

Incest is an evolutionary disadvantage, so cats are less likely to breed with their offspring than distant relatives. There’s less chance for negative traits to be passed down if the partner isn’t so genetically similar. Still, this doesn’t mean cats can’t mate with their offspring. The likelihood of it happening cannot be determined easily.

There are some circumstances in which inbreeding is more likely. Overall, it’s better to be safe than sorry by spaying and neutering pet cats as soon as they reach sexual maturity.

Do Mother Cats Mate with Their Offspring?

Once female cats become sexually active, they have to start their estrus cycle in order to be receptive to mating. Unlike females, male cats are always ready to mate. Their willingness to do so won’t depend on hormonal cycles.

Females tend to be pickier about their mates. Because of this, mother cats can mate with their offspring, but it’s hard to tell if a mother will. It’s not always guaranteed that they will be attracted to each other, even if they are both sexually mature and intact. There are certain factors that raise the chances of it happening, however. These include:

According to Scientific American, when animals grow up together, they are less likely to mate with each other. That’s true even if they aren’t closely related.

Growing up together triggers what’s called a “kin radar.” This lets the animal know who is a relative and who isn’t. If the mother and son were separated early on, there is a much higher chance that they will mate. Their kin radar doesn’t detect the other as a relative.

Older female cats are less picky about who they copulate with. Female cats do not have menopause and can breed for as long as they are alive. Of course, the older the female gets, the less fertile she becomes, and her offspring are less likely to survive.

Getting older makes the female cat more desperate to mate. She knows her window to reproduce successfully is getting shorter. Even if a mother cat ignored her son while she was young, she might change her mind when she’s older.

Cats have a need to reproduce that is beyond their control. Even if the mate options aren’t up to par, cats will breed with whatever they have available. If the son is the only other sexually mature male in the vicinity, there’s a higher chance the mother will mate with her son.

What Makes Female Cats Unlikely To Breed With Offspring?

Of course, if your female cat finds herself in any of the above circumstances, there’s still a chance she won’t mate with her offspring. That’s not just because of her kin radar, but because the son might not be a suitable male.

Female cats are the ones who choose who they want to mate with. When presented with many options, female cats will be most receptive to strong, healthy cats. One of the ways they determine which cats are suitable is through the smell of their urine.

When cats have a lot of high-quality protein in their diet, they produce 2 amino acids that form felinine. This is what gives cat urine such a pungent odor. The smellier the urine, the more felinine it has. The more felinine in a cat’s urine means that the cat frequently eats high-quality protein. This implies that the cat is a good hunter, making him a desirable candidate for female cats in heat.

Of course, the son may be a house cat and has a good diet filled with high amounts of protein. In this case, the mother is theoretically more likely to mate with him over any street tomcats with a poor diet. With that said, no official study has been performed to determine whether there is a correlation between a male cat’s weight and his breeding success.

House cats tend to be overweight and less physically active. Because no research has been done on the matter, it’s hard to know if a female cat prefers an active, battle-hardened street cat over a well-fed house cat. That’s true even if the latter has more felinine in his urine.

Do Father Cats Mate with Their Offspring?

He Is Sexually Aggressive

Cats that are sexually aggressive will often mount both male and female offspring. This doesn’t always result in breeding, but it does increase the risk.

Sexually aggressive cats sometimes continue their behavior even after they are neutered. Clearly, this specific aggression is usually a result of behavioral issues, not hormones. You can tell if your cat is sexually aggressive if it frequently mounts:

When a female cat gives birth, she will not go into estrus again until around the 12-week mark. This is usually when the cats begin weaning. However, some cat mothers will delay going into heat well past the 12-week mark. Female cats can reach sexual maturity as early as 4 months. As such, there’s a chance the father cat will try to mate with the offspring if she begins estrus before the mother.

There’s a higher chance for inbreeding (due to early maturity) to occur with house cats than feral cats. That’s because the father cat is usually the only sexually active male. If the female’s male siblings have yet to reach sexual maturity, due to lack of options, she will be receptive to the father.

Studies have shown that female cats with a shorter estrus period are less selective when choosing mates. That’s because their mating window is shorter. Female cats that are very young are more likely to accept their father as a mate because of this.

Young female cats have inconsistent, shorter estrus periods. They eventually even out and lengthen over time. If the daughter and the father are kept apart until the daughter’s estrus cycle stabilizes, there’s less of a chance for inbreeding.

There’s also less of a chance for inbreeding if the father is significantly older. Female cats prefer younger cats because youth implies vitality. This is important for the reproduction of healthy kittens.

Can a Mother Cat Get Pregnant by Her Son?

Mother cats can get pregnant by their sons as long as the son is sexually mature. Because of the genetic closeness of the two relatives, there’s a higher risk of genetic mutations in their offspring. However, the most lethal mutations often appear after multiple generations of inbreeding.

If you suspect that your cat got pregnant through her son, you should take her to the vet. Get her health checked and possibly have her spayed. Female cats can be spayed while pregnant, though it is up to the veterinarian to decide if it’s the best thing for your cat at the moment.

If the mother cat had no trouble mating with her son the first time, there’s a chance she’ll do it again. She may even choose other offspring next time, especially as she grows older. Pregnancy and birth weaken cats over time, so for the health and longevity of your female cat, consider spaying her.