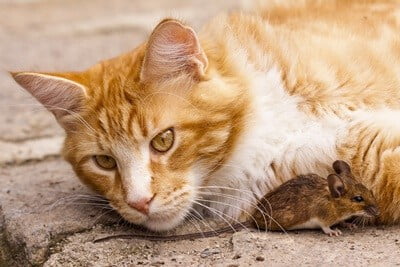 To own a cat is to accept feline instinct. As cats are born hunters, they often kill live prey such as mice or birds. Before killing a small animal, a cat will seemingly play with it first. While this looks cruel, the cat is acting in self-preservation rather than malice.

Cats play with prey to subdue it before delivering a killing blow, which can be dangerous when hunting rodents. Mice and rats will fight to stay alive, usually by biting. This could be painful for a cat or spread disease. Playing with prey by batting or tossing it leaves small animals exhausted or injured. The cat can then safely kill and conclude a hunt.

Seeing a cat play with prey can be upsetting, but you have to allow nature to run its course. If you disturb the hunt, both animals will suffer. The cat’s instincts will be frustrated, and the prey animal will likely still die. Permitting a cat to finish the job is normally a faster and cleaner end.

Why Do Cats Torture Prey?

Just as cats are governed by instinct, so are rodents. Cats are driven to hunt small animals, but prey wants to stay alive. This means that a mouse or rat will fight back with everything it has. Cats understand the dangers.

A feline’s killing blow is usually made with the teeth. The cat will sever the spine of a rodent or bird with a strong bite. In doing so, the eyes or nose are accessible to prey that chooses to fight back.

Rodents may be small, but they can be ferocious fighters. A mouse that is cornered and cannot escape will bite a stalking cat. If this bite is aimed at the eyes or nose, the cat will experience significant pain.

As explained by PNAS, rodents also carry a wide array of zoonotic diseases. These are illnesses that can be passed between animals. If your cat is bitten by a lively rodent, it may become sick. Some diseases are even fatal.

In the mind of a cat, batting prey around is not torture. The cat is not playing with its prey by any conventional definition. The cat is acting in self-preservation, not recreation. Cats do whatever they can to exhaust and daze prey before delivering a final blow.

To fully understand this, we must look at the way a cat typically hunts. The process looks something like this:

What some referred to as torture, or playing with prey, is a cat subduing its victim. Then, and only then, will it feel safe in concluding its hunt. To attempt the final step while the prey is still active is a needless risk.

How Do Cats Subdue Prey?

Cats have numerous methods of subduing prey. The approach your cat takes depends upon a range of factors. The size of the prey, energy levels, and personal safety will all be taken into account.

Many cats choose to bat prey around with their paws. This is intended to exhaust the small animal. The more physical punishment it takes, the less likely a mouse will escape. Rodents also have thin, brittle bones. The spine may be shattered during this interaction.

Cats also throw mice up in the air. This is often a killing blow. If the mouse lands on the ground with force, it will be crushed to death. If the prey survives, it will be dazed enough for a cat to quickly end its life.

Most cats hunt alone, but some will hunt in packs. This is especially common among younger cats. In such cases, the cats may subdue prey together. They will bat the animal between paws, passing it to one another. The cats feel there is safety in numbers.

It can be upsetting to watch a cat playing with prey. Do not intervene, though, as you’ll be placing your own health at risk. Either the cat or the prey may bite you in self-defense. The cat will also have frustrated instincts and may become aggressive toward you.

In addition, the damage to the prey animal will already be done. Even if the rodent limps away, it will be seriously injured. This means it will die anyway, but this may take longer and be more painful. Allowing the cat to finish is faster, cleaner, and more humane.

Some cats are gluttonous and will eat anything they can. This includes mice, rats, and birds. Other cats are only interested in the thrill of the hunt. Once the prey is killed, they lose interest.

The latter is more common in domesticated cats. Your cat knows that you will feed it according to a strict schedule. In most cases, specialist cat food is tastier than live prey. It is also more calorific and meets a cat’s nutritional needs better.

If your cat is prone to eating prey, watch it carefully. There are numerous risks to a cat eating wild animals, including:

Do not be surprised if your cat is not interested in eating prey that it kills. In many cases, the cat will discard the corpse, hoard it as a trophy or present it to you as a gift. This is referred to as hunting for sport.

Why Do Cats Hunt for Sport?

All cats are born with hunting instinct, including domesticated breeds. This is a holdover from a cat’s wild ancestors. Expecting a cat not to hunt is unreasonable and unrealistic. It is asking a feline to ignore its nature.

According to Applied Animal Behavior Science, cats have different hunting preferences. Some enjoy the challenge of difficult prey. Others prefer to pick off easier targets. The important thing is that a hunt is completed. This floods a cat’s brain with dopamine.

In the wild, cats hunt to eat. While this still applies to feral cats, it is obviously not the case with a pet. You supply your cat with all the food that it needs. This leaves domesticated cats hunting for recreation, not survival. The cat sates its instincts, then decides how to proceed.

Some cats will just walk away, leaving the corpse where it is. Most cats will claim a corpse as a trophy, though. Hunting is exhausting. Your cat will likely want a souvenir to mark its efforts.

Make sure the dead animal is not hidden in your cat’s bed. As a prey animal starts to decompose, health hazards become increasingly prevalent.

Many cats will present their kill as a gift to an owner. This is intended as a compliment. The cat is showing you that it can catch food if you are hungry. The cat expects to be praised for its hunting instincts. Offer this reinforcement, even if you are not pleased.

If a cat hunting for sport upsets you, the behavior can be curbed. A study in the Journal of Zoology found that fitting a belled collar halved successful feline hunts. This will frustrate your cat, though. You will not ‘cure’ your cat’s hunting instinct. You’ll just make it harder to satisfy this drive.

Play is critical to satisfying a cat’s hunting instinct. Chasing a laser pointer or a feather on a stick stimulates the same instincts as a wild hunt. The more you engage in these games, the less a cat will attack live prey.

Why Do Cats Lie on Their Prey?

When a cat rests on an item, it is declaring it as property. For example, your cat may lie on a book that you are reading or your computer. The item is important to you, so it is important to a cat.

The same logic applies to lying on prey. Once the cat has concluded the hunt, it will likely be exhausted. This means the cat is not yet ready to gift or eat the corpse. All the same, the cat is proud of its hunting prowess.

It does not want the corpse thrown away by an owner. More importantly in a multi-pet home, the cat does not want another cat claiming the kill. Feline territorial instinct is strong, especially where hunting is concerned.

By lying on the prey, the cat is sending a message. “This is my kill. I hunted it. Nobody is taking it away from me.” The cat will eventually grow bored of guarding the corpse. At this stage, it will eat the prey or offer it as a gift.

Why Do Cats Lick Their Prey?

Some cats lick dead prey. This happens when the cat plans to leave the prey in place, returning for it later. This is common in cats that eat live prey but are not presently hungry. The cat will remember where it left the body. It is licking the prey to remove its own scent.

The cat is acting with caution. Cats don’t like to leave any trace of their presence. This is why they groom constantly. By licking the prey’s fur, the cat cannot be identified as the killer. If another feline should happen upon the corpse, it will not know your cat is in the vicinity.

Alternatively, some cats will lick prey ahead of a meal. This is more common when a cat hunts and eats wild birds.

The cat is attempting to remove superfluous feathers from the corpse. The same logic applies to mouse fur. The cat is preparing the prey for eating later. By taking such steps now, the cat can get straight to the meaty interior when hungry.

Why Do Cats Play with Their Dead Prey?

Some cats continue to play with prey long after it has died. There are three primary explanations for this.

The first is that the cat is simply being cautious. It may not realize that it has successfully ended a small animal’s life. It will continue batting and tossing the prey until it is certain. Eventually, the cat will grow bored and conclude the hunt.

It is also possible that the cat has not yet sated its instinct. The cat is disappointed that it killed the prey so quickly. It’s continuing to fulfill hunting rituals for its own satisfaction. Again, eventually, the cat will grow tired of this.

Finally, the cat may be confusing the prey with a toy. A study in the Journal of Veterinary Behavior declares furry mice the preferred toy for the majority of cats. If your cat owns such a toy, it may be treating a live mouse like a recreational plaything.

If you catch your cat playing with a dead animal, provide a distraction. Once your cat’s attention is focused elsewhere, dispose of the corpse. It is not sanitary to keep a deceased animal. The cat may make itself unwell by continuing to place the corpse in its mouth.

Cats playing with prey before killing looks like an act of gleeful cruelty. It is important to remember that this is not the case. Your cat is simply acting upon instinct and protecting itself. Subduing prey before killing it is safer than providing a fighting chance to retaliate. Here’s some advice on how to stop your cat from catching mice.