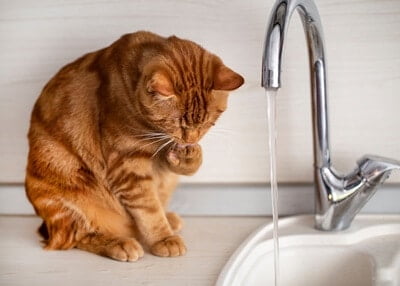 Some cats display odd behaviors when drinking. You may find your cat pawing at its water bowl or splashing around in it for no reason. This can be explained by the fact that cats are finicky creatures and still retain many of their wild instincts.

Cats put their paw in their water dish for the following reasons:

Though it may seem like simple quirkiness, it’s important to understand how your cat behaves around its bowl. Even the strangest behavior can tell you how your cat feels about certain situations.

Why Does My Cat Paw Around Its Water Bowl?

Cats pawing around their water bowl may seem strange, but there will be a rational explanation.

Cats will splash, touch, or paw at their water for the following reasons:

If your cat dips its paw in its water bowl before licking it, it’s doing so due to whisker fatigue. A cat’s whiskers are highly sensitive because they’re more deeply rooted than normal fur.

At the end of these whiskers are a collection of nerve endings that allow the cat to do the following:

So, instead of drinking normally, the cat will put its paw into the water until it’s wet and drink from its paw. If your cat does this a lot, consider getting it a wider bowl and filling it to the top.

A cat may drink from its wet paw instead of the bowl because it feels safer that way. Cats are cautious creatures, partially because they aren’t fully domesticated.

Because they still believe that danger can occur at any time, they feel vulnerable when hydrating. By drinking water from their paw instead of the bowl, they’re able to keep an upright posture and are more aware of their surroundings.

This tends to happen when you put the cat’s bowl against the wall, and it has to drink with its back against the entire room, which might make it feel too vulnerable.

By changing the bowl’s position, you can relax your cat.

According to Basic and Applied Histochemistry, cats have eccrine glands on the pads of their paws that they use to mark their scent.

When a cat wants to mark its bowl, it’ll paw around it before or after drinking. Male cats tend to mark their territory more than female cats, so this is the most likely reason if your male cat does it.

Cats are very curious animals, so anything bright and shiny will catch their attention. If the cat’s bowl is reflective in any way or has a bright, interesting color, the cat will paw around it to discover more.

Some cats are finicky with water and will only drink it if it’s fresh. If the water in the bowl has been out for a few hours, the cat might think it too dirty to drink.

In the same way that a cat will bury the waste in its litterbox, it’ll also try to ‘bury’ the water bowl.

A cat will paw around its bowl compulsively if it has OCD.

According to the Journal of the American Veterinary Medical Association, cats can develop OCD due to stress and environmental issues.

Female cats are more likely than male cats to develop OCD. So, if your female cat paws around her water bowl, pay close attention to any other behavior that may indicate that she’s stressed out.

Why Do Some Cats Paw at Water?

The relationship cats have with water is often misunderstood.

Many believe that cats want to get as far away from water as possible. However, if your cat paws at the water in its bowl, it’s most likely playing with it.

If they’re bored and the water in their bowl provides them with enough entertainment, they’ll paw at it.

Why Do Cats Paw at Water Before Drinking?

There are three reasons why a cat will paw at the water before drinking it:

Cats prefer to drink moving water because cats drink out of rivers and lakes. These bodies of water aren’t stagnant, which means the water stays fresh and any debris flows away.

To a cat, stagnant water means contaminated water. Thus, if you give your cat water in a bowl, it might move it around to aerate it before drinking.

A cat’s whiskers are very sensitive, so your cat will want to protect them, even when drinking water.

Before taking a sip, your cat might paw at the water to measure the depth of the water and the width of the bowl. This is so it can calculate whether it can drink from the bowl without its whiskers touching the water or the bowl.

Some cats paw at the water out of instinct. If a cat is drinking water out of a river or lake and there are leaves in the way, the cat will move them with its paw before drinking.

Your cat will call upon its ancestral instincts right before drinking, checking for any debris or bad smells.