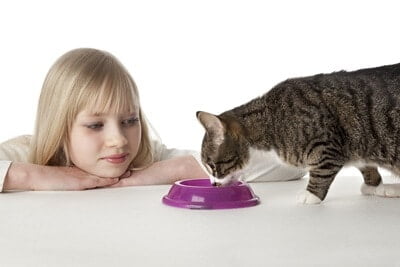 Some cats only like eating when their owner is present. Perhaps your cat even likes to be petted while eating. Most people don’t know if this is a good or bad thing. It can be confusing behavior, but understanding it can give you insight into your relationship with your cat.

Your cat wants you to watch it eat because it feels safer when you do. Cats feel vulnerable while they’re eating. They are so focused on the food, they’re not able to focus on their surroundings. When you have a bond with your cat, it trusts you to watch its back while it eats.

Cats, even domestic ones, are predators that always need to know what goes on around them. Otherwise, they don’t feel comfortable. Of course, this behavior depends on the cat’s environment, how much it trusts you, how you raised it, and its personality. Let’s explore how this habit develops, and if there’s a way to stop it.

Table of Contents show
1 Why Do Cats Need You to Watch Them Eat?
1.1 Inconsistent Affection Eating
2 Why Does My Cat Eat Every Time I Walk in the Room?
3 Why Do Cats Like to be Pet While Eating?
4 Why Do Cats Want You to Walk Them to Their Food?
5 Why Do Cats Look Around When Eating?
6 Is It Bad If My Cat Only Eats When I’m Watching?

Why Do Cats Need You to Watch Them Eat?

Some cats will only eat when observed, because it makes them feel safer. Have you ever wondered why most animals eat while standing? It’s because they are able to defend their food better or run if there’s trouble while they’re in the middle of a meal.

To us, 10,000 years is a long time, but it isn’t enough to rid cats of their wilder instincts. Even when they eat, cats will instinctually keep their guard up and watch out for predators.

Cats can’t eat properly if they think they’re in danger. However, they still need to eat, which is why your cat might only be willing to do so if you’re watching it. This is called “affection eating.” It’s when cats are dependent on their owner’s presence in order to eat.

Although affection eating is the primary reason why cats only like to eat with their owners, there might be other factors that cause this behavior, such as:

It’s possible that your cat is not an affectionate eater and doesn’t need you to watch it all the time. However, in instances where it feels threatened thanks to a change in the environment, being with it will help the cat feel safer.

Cats are highly sensitive to any kind of change. According to Small Animal Practice, having a fixed meal routine for your cat will improve its health and temperament. As such, anything new (such as a stranger in the house, new furniture, or a noise outside) might frighten a cat too much to eat alone.

If it’s because of habit, it doesn’t necessarily mean that it’s scared. Instead, it means that the cat is so used to eating with you that not doing so will be too big of a change.

Last but not least, your cat might be sick. There’s nothing that will make a cat feel weaker and more vulnerable than illness. If this is the case, then it will only eat while you’re watching, because it feels too weak to eat alone.

Why Does My Cat Eat Every Time I Walk in the Room?

If you have a cat that only eats whenever you walk into the room, it’s because those are the only times when it feels safe enough to eat. Because cats are predators, they have extremely sensitive instincts that they use to monitor their surroundings. While they eat, those senses become dull, which makes them feel unsafe.

Although the cat may have been living in your home for a long time, this isn’t enough to override its survival instincts. In their mind, another animal could come take its food or attack it while it eats.

According to Animal Cognition, cats prefer free feeding, as it requires the least amount of effort to enjoy a meal. However, even these cats will avoid food if they feel unsafe.

Because of this, many cats will refuse to eat unless they feel fully comfortable. They know that they can go days without food, but if another predator comes, they might be fighting for their lives. Instead of risking it, they would rather wait for you to walk into the room to eat. That’s true even if it means they can’t eat as much or as frequently as they would like.

Why Do Cats Like to be Pet While Eating?

Some cats are overly affectionate and require petting while they eat. Cats like this because it makes them feel safe enough to let their guard down and have their meal peacefully. For most cats, it’s enough to simply know that you are watching them. Other cats might have a bit of separation anxiety and will only eat if they can confirm that you’re still there with them through your touch.

Cats that have had traumatic early years, got separated from their mother too early, changed owners, or moved houses tend to develop separation anxiety. Besides wanting to be petted while eating, separation anxiety can also cause a slew of behavioral issues in cats.

Petting your cat while eating may seem like a harmless activity. You might even be flattered that your cat thinks of you so fondly. However, if you know that your cat does it because it’s too dependent on you, you’ll need to do something to help it eat on its own.

Why Do Cats Want You to Walk Them to Their Food?

Sometimes, a cat won’t eat unless you carry it or walk it to its food. Many owners believe that it’s because their cat simply forgot that it had food on the plate. In actuality, it’s because the feline wants your company while it eats.

Cats are incredibly intelligent, so they recognize that having you around will make them feel safer while they eat. This is a big sign of trust, meaning that you and your cat have a strong bond.

In the wild, lions are the only felines that hunt and eat together. Cats (especially strays or distrusting cats) prefer to eat alone. However, if your cat purposefully seeks you out when it’s time to eat, it means it loves you very much. The feline knows that, not only will you not hurt it while it’s vulnerable, but if something goes wrong, it can trust you to defend it.

Why Do Cats Look Around When Eating?

Cats look around when eating for 3 reasons, such as to:

Cats are naturally cautious, which means that they are always on the lookout for danger, even while eating. If you’ve ever adopted a kitten or taken in a stray, you might notice that it looks around a lot while eating. This behavior might become more infrequent, though, as it becomes accustomed to living in your home.

Even though cats are less attentive while eating, their senses are still considerably sharp. Different noises, both inside and outside the house, may grab the cat’s attention while it eats. As such, it will look around to see what it is.

Lastly, if your cat is an affectionate eater, it will look around to make sure that you are still in the room. Because you’re its source of comfort, it will only want to eat as long as you are there. Even if you leave and the cat continues to eat, it might not eat as much as it could have if you had stayed.

Is It Bad If My Cat Only Eats When I’m Watching?

Cats being affectionate eaters can be a good and bad thing. It’s good because it can help you gain insight on your cat’s health, but it can also make your cat too dependent on you.

A cat that wasn’t an affectionate eater before might become one because it’s ill or developed separation anxiety. You can use this knowledge to help your cat eat while it recovers. You can also take it as an early warning sign for separation anxiety before the cat develops other problematic behavior, such as:

A cat that refuses to eat when you’re not there can also be a problem if you work long hours or if you leave home for a few days. It’s perfectly normal to leave your cat home alone for a few days, provided that it has enough food, water, and a person to check in every now and again.

However, if your cat becomes too reliant on you, it may not eat at all unless you’re there. Undereating can lead to a lot of health problems. As such, you will have to train your cat to learn how to eat on its own if it’s an affectionate eater.