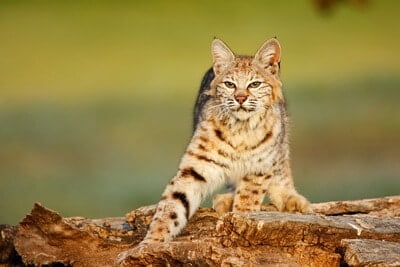 The bobcat (lynx rufus) is a small, wild feline inhabiting forests, swamps, and desserts. Bobcats got their name based on how short their tails look (as if the end has been cut off or bobbed) and how they walk. Due to domestication and breeding, some house cats share similarities with bobcats.

There’s no evidence that house cats can become pregnant by bobcats, despite certain similarities. While some house cat breeds may look closely related to bobcats, they almost always look the same.

Table of Contents show
1 How To Tell a Bobcat From a House Cat
1.1 Fur And Tail
1.2 Face
1.3 Legs
1.4 How Big Is A Bobcat Compared To A House Cat?
2 Can a House Cat Get Pregnant By A Bobcat?
3 Domestic Cats That Look Like Bobcats
4 Are Bobcats Dangerous to Cats?

How To Tell a Bobcat From a House Cat

Bobcats and house cats share similarities, but there’s more that sets them apart.

They’re not the same species, and various physical characteristics distinguish a bobcat from a house cat, including the following:

The simplest way to tell a bobcat from a house cat is the fur and tail.

Bobcats have a fur pattern around the sides of their head. This is called a ruff, which looks like a tiny mane, except it is mainly concentrated around their cheeks downward.

Their black-streaked ears have an extra tuft of white fur at the tips of them. Their fur colors are distinctive and are usually brown or red-tinged with lighter color bellies. This is compared to the colorful and patterned fur of domestic cats.

Another way to tell the difference between a bobcat and a house cat is how their tail looks. Bobcats get their name from their short, stubby tail that looks like part of it was cut or bobbed off. While house cat tail sizes can range from short to long, bobcats always have this distinct look to their tail.

House cats have a fluffier, rounder face than their bobcat counterparts.

The rear legs of a bobcat are slightly longer than their front legs, which gives them a possible misbalanced and asymmetrical appearance. This leg asymmetry contributes to their unique gait (which also contributes to their name), making it look like they’re bobbing up and down.

Domestic house cats usually have legs that are similar in length and are level with each other, ensuring that their bodies are mostly parallel to the ground.

The long rear legs of a bobcat give it more power when it jumps, swims, hunts, and walks through certain terrains, including tall vegetation and deep snow.

How Big Is A Bobcat Compared To A House Cat?

According to the Colorado Department of Energy and Environmental Protection, adult bobcats, both male and female, can be 1.5 to 3 times the weight of the average domestic shorthair cat.

The average adult domestic shorthair, an averagely sized house cat, is ideally at a weight of 10 pounds.

Can a House Cat Get Pregnant By A Bobcat?

You may wonder if a bobcat can impregnate a house cat since they are similar animals.

Certain breeds of cats have some genetic similarities to their bobcat ancestors, but this doesn’t mean that they can produce viable offspring.

According to Forensic Science International Genetics, there is currently no assay and DNA testing available to determine if bobcat and house cat hybrids exist. Despite this, there are ways to see if a subject could be a hybrid cat.

The above study found that the subject, a potential bobcat-house cat hybrid, was not a hybrid by seeing if there were molecules of a common domestic outdoor cat disease: feline leukemia. The researchers could not find these molecules inside the subject cat and concluded that it wasn’t a bobcat and house cat hybrid.

There have been reports of a bobcat and domestic cat mating together. However, there are no reports of them producing viable or fertile offspring.

A decreased level of fitness can be defined as the following:

This can even be as extreme as infertility, which is why it’s unlikely that we see these hybrids.

You may wonder whether domestic cats are the same species as bobcats. Both bobcats and domestic house cats are within the same subfamily (felinae), which is why they look so similar.

However, it is important to distinguish between family and species, particularly when thinking about biological taxonomy.

Family distinctions are useful for deriving phylogeny or evolutionary information. However, organisms are considered within the same species when they’re a group of closely related organisms that can produce fertile offspring together. The key part of this is producing fertile offspring.

House cats of various breeds can interbreed because they’re within the same species. However, a bobcat and a domestic house cat cannot produce fertile offspring.

The following is a list of some domestic house cats that look a lot like the wild bobcat. Keep in mind that some of the breeds on this list mimic only parts of what makes a bobtail a bobtail. This includes the Japanese Bobtail and its bobbed tail, without sharing a bobcat’s dark fur coloration.

Many of them were named after the bobcat itself due to their short, bobbed tail. This doesn’t mean that these domestic house cat breeds were bred from bobcats in the past.

Breeders selected individuals with shorter tail lengths and continued to breed them to get their tails to the desired lengths. As stated, domestic house cats cannot get impregnated by wild bobcats.

Are Bobcats Dangerous to Cats?

Because bobcats can grow 1.5-3 times the size of the average house cat, they’re dangerous to house cats.

However, this danger isn’t only attributed to their size. It’s their diet and hunting habits that put your house cat at risk if there are bobcats in your area.

Bobcats are carnivorous and eat a wide variety of small mammals, including:

According to the California Department of Fish and Wildlife, bobcats reside in low and mid-elevation woodlands and forests, and den in areas with dense foliage cover, stumps, and rock caves. You can find bobcats from southern Canada, throughout the United States, all the way down to northern Mexico.