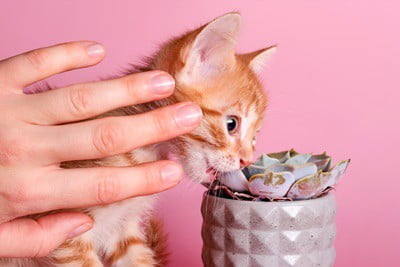 Cats have minds of their own. Every now and then, they need to be told “no” when they’re misbehaving or about to do something they shouldn’t. But simply saying the word isn’t enough. You must accompany the command with actions to hammer home the message.

Cats don’t understand the word “no.” Therefore, the way you say it to your cat is crucial. When disciplining your cat with the commands, use a firm, authoritative tone and don’t change the way you say it. That way, your cat will understand what it means. Use dominant body language techniques and look into your cat’s eyes while you give the command. Hissing like a cat and using a deterrent are effective ways to train your cat what no means.

If you want to learn how to tell a cat no, we’ve got some tips on how you can discourage your cat from misbehaving.

Table of Contents show
1 Do Cats Understand No?
2 How To Say No in Cat Language?
2.1 Authoritative Voice
2.2 Consistent Tone
2.3 Hiss Like A Cat
2.4 Body Language
2.5 Use A Deterrent
2.6 Redirect Attention
3 Why Don’t Cats Listen to Commands?
3.1 Lack of Understanding
3.2 Age
3.3 Lack of Motivation
3.4 You’re Not the Boss
3.5 Breed
4 How To Train Your Cat To Listen
4.1 Rewards
4.2 Celebrate Good Behavior
4.3 Avoid Negative Tactics

Do Cats Understand No?

Cats don’t speak English – or any language, for that matter. This means that cats don’t understand the word “no” unless they’re trained to. Teaching your cat to know when to stop doing something is crucial if it:

While cats can’t understand human words and their meanings, cats can recognize the sound of “no,” particularly if their owners say it in a distinctive, consistent manner. Doing so can help your cat identify the sound. With training, they’ll eventually understand what it means and should respond to the command whenever you say it.

How To Say No in Cat Language?

When you give a verbal command to your cat, it will listen to the pitch and volume of your voice and associate it with you being angry. If you’re not careful with how you train your cat, it won’t stop doing the action but will learn to do it when you’re not around to scald it.

This is why you mustn’t shout at your cat. Instead, remain calm and focus on teaching it to understand what you want it to do. In order to train your cat to know when you say “no,” follow these steps:

One of the most essential steps in telling your cat “no” is to get your pitch right. If you give the command in the same way you say, “Good kitty,” your cat will misinterpret what you’re saying and won’t learn what the order means. It might even think you’re encouraging it to misbehave.

Instead, highlight the displeasure in your voice by saying “no” loudly and firmly, without shouting. Your cat will pay attention to the pitch of your voice and will realize that it’s different from your typical communication sounds.

Another way to say no and to actually get your cat to understand what it means is to use a consistent tone whenever you give the command. If you deviate from the firm, authoritative pitch you use when saying it, your cat will become confused and won’t recognize it as the same word.

As a result, attempt to give the command in the same way every time you need to say “no.” That way, you’re more likely to get results, as your cat is more likely to respond to you.

As well as saying “no” firmly and with authority, hiss like a cat straight after giving the command. You might feel a bit silly doing this, but cats understand this noise and behavior and are more likely to realize that the word “no” has negative associations to their behavior.

According to VCA Hospitals, hissing is a species-appropriate punishment that’s far better than physical retaliation techniques, preventing cats from becoming fearful or retaliating in response. Associating an unpleasant consequence with your cat’s undesirable behavior, such as hissing, is enough to get it to stop being naughty.

Body language also has a significant part to play in how well your cat grasps the command. Cats reveal what they’re thinking and feeling through their body language and respond to physical cues from other creatures, including their owners.

Looking at your cat directly into its eyes is one of the most effective ways to exert dominance. Similarly, using your finger to point at your cat while saying “no” is an effective way to get its attention.

You might also want to ignore your cat for a few minutes, effectively putting it into time out. Some cats misbehave to get their owner’s attention. By ignoring it, the cat will get bored and move on. This also helps to discourage unwanted behaviors.

Sometimes, saying the word “no” alone isn’t enough to stop your cat from doing what it shouldn’t be. If your cat refuses to listen to your command, deter it by making a loud, unpleasant noise. You could:

This should startle your cat enough to stop what it’s doing. However, be careful not to frighten it, or it’ll become stressed and fearful of you.

Every time your cat misbehaves, give the command and redirect its attention with toys, games, and treats. Don’t give your cat a treat straight away, or it may think it’s being rewarded for its naughty behavior. Instead, distract it from what it was doing and let it move on to something else to entertain it.

Why Don’t Cats Listen to Commands?

It’s frustrating when your cat ignores your commands and proceeds to continue doing something you don’t want it to. While there could be an innocent explanation, your cat likely doesn’t have the desire to listen to your command.

If your cat’s heard your command, its ears will twitch. It may also turn its head in recognition. These are tell-tale signs that your pet’s ignoring you. Here are the main reasons why your cat doesn’t listen to your commands:

Despite all your attempts, your cat might not be intelligent enough to understand commands. It’s believed that cats have an intelligence level comparable to a two-year-old human child. If you think about children at this age, their learning abilities vary from person to person – some are quicker learners than others. The same goes for cats.

Simply repeating the command over and over isn’t enough to help your cat know what it means. It’s much easier to teach kittens than it is to train older, more established cats, and cats with stubborn personalities are more likely to dismiss what you’re saying.

It’s also possible that you haven’t spent enough time training your cat to understand them. It takes patience and consistency to train a cat. If you give up too quickly or assume it knows the commands, you likely haven’t given it enough time.

If your cat’s aged 15 or older, it’s possibly suffering from cognitive decline. According to Veterinary Clinics: Small Animal Practice, learning and a lack of understanding are some of the first signs of declining cognitive function.

Also, if your cat’s hard of hearing, it’s unlikely to have even heard the command. In this case, your cat’s not ignoring you. It simply hasn’t registered that you’ve said something.

Most cats are motivated by food. If they don’t get something in return for obeying the command, they don’t have enough encouragement to do what you want them to. As a result, your cat will ignore you.

Unfortunately, when your cat’s naughty, giving it a treat or a piece of cooked chicken is akin to a reward for its bad behavior, making its behavioral issues worse. And from a moral standpoint, you probably don’t want to reward a misbehaving cat.

However, there is good news. A study by Behavioral Processes found that cats actually prefer human interaction to food and toys. Instead of motivating your cat with food, try encouraging it with cuddles and affection. That way, it’s more likely to want to follow your commands.

You’re Not the Boss

Your cat will ignore you if it doesn’t see you as the boss. If you allow your cat to assume dominance over you, you’ll never get it to listen to your commands. That’s because it won’t respect you enough to follow them. Dominant cats:

If your cat dies any of these things within your presence, it believes it holds dominance over you. To right this, you’ll need to set boundaries and discipline your cat using more advanced techniques than simply saying “no” alone.

These cats can be trained to follow commands more easily. On the other hand, breeds that aren’t considered as intelligent are less forthcoming about listening to and following orders and prefer to sleep.

How To Train Your Cat To Listen

If you’re having difficulties with getting your cat to listen to you, try some of the following training techniques:

To do so, establish a rewarding system using its favorite treats and toys. As soon as it behaves and does what you want it to, let it play with its toy or give it a couple of treats. As mentioned, you could pet or stroke it, especially if your cat’s bonded with you.

Every time your cat listens and responds to your commands, celebrate its behavior by using soft, high-pitched tones and positive body language movements to communicate with it. That way, your cat will understand in simple terms that you’re happy with it. This is also where rewards come in.

Using a spray bottle, scuffing your cat by the neck, or shouting to scald your pet will cause stress and fear. In turn, your cat may adopt further bad habits, such as having accidents outside of the litter tray and scratching the furniture. Positive reinforcement methods are always best – for both you and your cat.

While saying “no” to your cat and getting it to understand what you mean is a complex process, you must persevere with helping your pet understand what it means. Cats don’t always mean to do naughty things, but getting them to stop doing them as early as possible can help prevent any unwelcome situations later on down the line.

1 thought on “How To Say No To Your Cat”