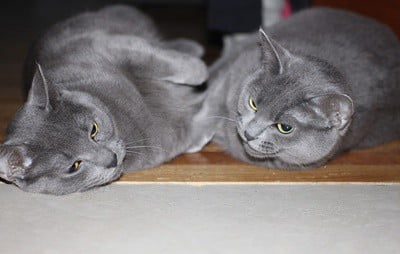 It’s not always easy to tell male and female cats apart until they reach maturity. Only once cats start exhibiting mating behavior or start spraying can most owners determine a cat’s sex. However, scientists believe that you can determine a cat’s gender by examining the physical structure of the face and head.

You can tell a cat’s gender based on the differences in male and female head structures, including the size, forehead, snout, cheeks, whisker pads, nose wings, and fur color. This is due to sex hormones developing these secondary characteristics, which can only take place in unfixed adult cats.

The common trend in male versus female cats is that males are larger and heavier. They have blockier, sturdier bone and body structures. Meanwhile, females are smaller and lighter with more slender physical features. However, depending on the breed of feline, this isn’t always accurate.

Do Male Cats Have Bigger Heads than Females?

Male cats have bigger heads than females, partly because their cranial bone structure is thicker and heavier. They also tend to have more muscle and larger bodies, allowing them to grow bigger than females. When you put it all together, a bigger cat is likely to have a bigger head.

There are exceptions across different breeds or even within the same breed. You may own a female cat that’s larger than a male, and its head will be larger as a result. If you buy two kittens of different sexes, the largest may not immediately be the male, head size or not. As they mature, their body types and skull sizes will change.

Additionally, a cat’s health and any genes inherited from its parents are considerations. If you want to get a firm understanding of the cat’s sex, you need to look into more specific tells, which may disappear if you had your cat fixed.

Role of Hormones in Growth

Usually, if you don’t plan on breeding your cats, you’ll get your male cat neutered before 1 year of age.

For male cats, neutering them before 1-year-old will prevent them from developing:

This is because neutering will remove the testes, which are the main source of testosterone. This hormone is responsible for muscle growth and strength.

By limiting your cat’s testosterone before it reaches full maturity, you can prevent normal sexual behaviors that would otherwise be exhibited after 4-6 months.

This further adds to an unfixed cat’s size difference, and it’s why a male could feel heavier than a female cat. It also explains why males have a blockier and sturdier build and more muscle.

However, even if male cats are neutered, they tend to have bigger heads than females. According to Reproduction in Domestic Animals, 2 groups of male cats were neutered; one group at 7 weeks and the other group at 7 months. Both groups of fixed male cats had a 13% greater bone radius than intact females.

It was also found that there was a higher likelihood of fractures in fixed male cats because neutering inhibits the exaggerated bone growth and density seen in unfixed males.

Therefore, male cats have larger and thicker bones than females, fixed or unfixed.

How to Tell Cat Gender by Face

Aside from its head size, you can work out a cat’s sex by its facial features.

Much like head size, if your cat is not spayed or neutered, it’ll start exhibiting sex characteristics that match its sex. That’s because leaving your cat unfixed allows sex hormones to be produced, contributing to the development of male or female structures. As a rule, male cats have rounder and fuller faces than female cats.

The table below outlines the different facial characteristics of male and female cats:

Larger cheeks are just one of the secondary sex characteristics found in male cats.

Secondary characteristics are features that develop from the production and secretion of sex hormones, which are visibly seen in the body. They’re similar to pubertal changes in humans.

Cheek pads in male cats are more developed than in female cats.

Have you ever seen an unfixed, adult male cat (tomcat)? You may notice that his cheek pads resemble jowls more than cheeks. Jowls are a slight sag in the skin around the chin or cheekbones.

If you know what bulldogs look like, you may notice that their cheek pads sag past their mouth, and the skin is loose. This is the same in male cats, although not as exaggerated as in bulldogs.

Male cats have more angular cheekbones than female cats because they have thicker and larger bone structures. These blocky cheekbones contribute to the iconic look of male cats.

Whisker pads are larger and much more pronounced than the whisker pads of females. Much like their cheekbones, these whisker pads further add to their bigger-looking cheeks.

Larger cheeks and whisker pads in male cats may be an evolutionary adaptation, serving as protective padding during fights and scuffles. Wild or non-domestic male cats fight each other for mates, often resulting in hard bites to the cheeks.

Males with bigger and fuller cheeks can withstand more attacks. Without this trait, they would suffer severe injuries. The thicker the cheeks, the more likely they are to win over and mate with a female cat in heat.

The snout is a part of the face that includes the mouth, nose, and whiskers. It’s the part of the cat’s face that protrudes from the flat part of its head, just below where its eyes rest.

Because male cats are usually larger, they naturally have bigger snouts. This is clear when comparing a male and female cat’s snout side by side: the female will have a more slender and narrower snout than the male.

We’re beginning to see a common trend in male versus female cat features. Since males have sturdier and larger bone structures, they naturally have larger foreheads.

The forehead of a male cat appears blockier and more geometric. In contrast, females have a gentle, sloped structure to their forehead.

This facial difference is more subtle across male and female cats. Nonetheless, male cats have broader nose wings, stretching the width of the nose from one nostril to another. In male cats, this feature is much wider than in females.

Facial fur coloration only differs across certain breeds of cats. For example, cats with tortoiseshell and calico fur are more often than not females due to their genetics.

However, some cats can have 3 chromosomes rather than the typical 2. In such cats, it’s possible to have a male calico or a male tortoiseshell, especially if they have chromosomes that look like XXY.

Male cats with calico or tortoiseshell fur are sterile and cannot pass their genes onto future litters.

How To Sex A Cat

Although it’s not always easy, you can tell a cat’s sex by its face.

Male cats are larger, sturdier, angular, and blockier than females, so they have more rugged, tough faces. Female cats are more slender, narrow, delicate, and tiny.

Male cats have larger heads than females, partly due to their heavier and thicker bones.

It’s easier to tell male and female cats apart when you have two for comparison. Even still, telling a cat’s sex by its facial features isn’t the most reliable method. If you’re unsure, a vet can assist with sexing cats.

You can sex cats at home. According to Washington State University Vet Med, you’ll need to lift your cat’s tail and examine its anus and genital opening.

However, this isn’t a substitute for veterinary expertise.