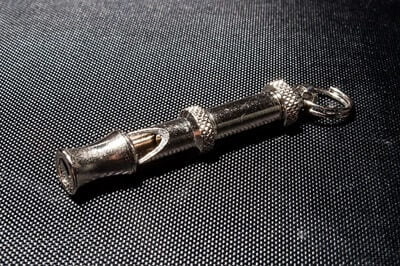 Dog silencers are mainly used to train canines. They emit a sound that’s believed to be unpleasant for dogs to lessen negative behaviors. This emitted noise is beyond a human’s hearing range but not a dog’s. However, a cat’s hearing is much better than that of a dog.

Despite their superior hearing, cats don’t seem to be affected by dog whistles. As cats are good at hiding their discomfort, it’s impossible to be 100% certain.

Rather than using dog whistles, there are more effective, humane, and safer ways to control a pet’s behavior. The key is understanding why an animal has that behavioral problem in the first place.

Dog silencers are also sometimes marketed for cats. Aside from these products, there are also ultrasonic cat deterrents on the market. These feline deterrents work the same way as dog silencers: they emit a sound that’s meant to stop a certain behavior in cats.

Cats’ ears detect sound exceptionally well, making them stealthy and effective predators. Cats can rotate their ears separately. This allows them to tune in to two different locations, even when they’re on the opposite sides of a room. This allows them to detect the softest noise, avoid predators, and track prey.

The flaps of the ears themselves (pinnae) can move independently from the rest of the ear. They can move backward, forward, and sideways to further hone in on a noise. From 1 yard away, cats can detect noise within a 3-inch range.

What Is a Cat’s Hearing Range?

A cat’s hearing is similar to that of humans in the lower range. But cats can hear sounds at higher ranges than people. Cats can hear up to 64 kHz. Compare this to the human range, which only reaches up to 20 kHz.

This ultrasonic hearing falls within the range of sound that dog whistles emit. Dog whistles emit a sound that can range from 23 Hz to 54 kHz. A cat’s hearing range is 48 Hz to 85 kHz, falling within a dog silencer’s upper limits.

What Is A Dog Whistle?

Dog whistles, also known as the Galton’s whistle, can emit sound in ranges beyond human hearing. This range is also known as ultrasound. Dog whistles are often used as a way to train or discipline dogs. This is because it is believed that dogs do not like the sound dog whistles make.

Owners can then blow the whistle whenever a dog exhibits an unwanted behavior. These behaviors are often due to excessive barking. But it can also be for other behaviors, like biting or going into a restricted room. Eventually, a dog should do less of that negative behavior due to concerns over the dog whistle noise.

Dog whistles can have either fixed or adjustable frequencies. However, even with adjustable whistles, there is no way to set a whistle only to affect dogs and not cats. Cats can hear at higher and lower frequencies. If a dog can hear a dog whistle, then a cat definitely can as well.

How Do Dog Whistles Work?

Dog whistles emit a noise in the range of 23 Hz to 64 kHz. This sound is unpleasant to dogs, making it a way to punish certain behaviors.

Dog whistles operate on the principle of positive punishment. Simply put, this refers to adding an unpleasant stimulus to lessen a behavior. It comes in hand with negative reinforcement, which delays the unwanted stimulus to increase a behavior.

For example, when a dog barks incessantly, an owner will use a dog whistle. The dog will then associate the unpleasant sound with barking and will bark less. This is a form of positive punishment. When the dog does not bark, the owner does not use the whistle. The dog will continue not to bark to avoid the unpleasant sound, which is negative reinforcement.

How Do Cats React To Dog Whistles?

According to most cat owners’ anecdotes, cats don’t seem to react to dog whistles that much. This isn’t entirely unsurprising. Cats, after all, are known to react to most things with aloof disinterest.

This stereotype isn’t completely unfounded, but it can be an issue when it comes to your cat’s health. Unlike most animals, it is hard to determine whether cats are in discomfort. Cats are masters at hiding pain. In the wild, a cat that looks like it’s in pain is perceived as weak. This makes them a target of larger predators.

Even if dog whistles could hurt cats, we probably wouldn’t know. A cat’s reaction to pain is easy to miss. Even when noticed, it can be attributed to other things, like being picky or unfriendly.

More often than not, owners don’t report their cats reacting negatively to dog whistles. However, this doesn’t mean that they aren’t being hurt by the sound they emit. Whether or not cats are harmed by whistles or not, it’s best to avoid them altogether.

Cats’ ears are highly sensitive. Because of this sensitivity, there are many sounds that cats would hate. Even if we aren’t sure whether dog whistles affect cats, there’s good reason to believe that they do. Dog whistles could emit a combination of sounds that would irritate cats. Here’s why:

Owners have noted their cats reacting negatively to high-frequency noises. While we cannot hear the noise, this reaction is often linked to objects that emit noises at a high frequency. This includes computer screens, fluorescent lightbulbs, and remote controls.

Cats, with their ultrasonic hearing, can be easily startled by sudden noises. Small bursts of sounds, like those that can easily be made with a whistle, are bound to alarm a cat. In the same vein, short and abrupt commands like “No,” or “Stop” work because they are alarming.

A sound that seems loud to you will seem even louder to a cat. But what if you can’t hear the sound, such as that of an ultrasonic whistle?

Because most ultrasonic whistles only operate on ranges higher than human hearing, you have no way to know how loud it is. A loud whistle can be grating to the sensitive ears of a cat.

Cats are primed to dislike the sound of hissing. When scared, cats will bare their teeth and make a hissing sound. This is also the common stance that cats assume when they are fighting.

Therefore, cats link hissing sounds to aggression and fright. The hissing sound can make cats aggressive and stressed, and they will seek to avoid this noise. Depending on its design, a whistle can also make a hissing noise on top of the high-pitched noise.

According to their range of hearing, dogs should be able to hear dog whistles. But just because an animal can hear a dog whistle doesn’t mean that it’s effective.

While there aren’t many studies on a dog whistle’s effectiveness, there is reason to believe they aren’t. Here are the reasons why dog whistles are likely ineffective:

Habitation means getting used to a stimulus. No matter how unpleasant something is, you will get used to it if it happens enough times.

The same can be said for animals. Ultrasound doesn’t have any properties that make it more unpleasant than an audible sound. This is mostly due to habituation. After a while, animals learn to ignore a sound, no matter the range.

May Just Be A Sound To Animals

High-pitched sounds are annoying to humans, so it makes sense that they’re annoying to animals, too. But when it comes to animal hearing, things may not be as straightforward as they seem.

The term ultrasound means anything above human hearing. What could be high-pitched to a human may be a normal sound to an animal. And since we’re not bothered by normal sounds, it makes sense that animals aren’t, either.

Aversives function on the concept of using punishment to train a pet. However, a lot of data shows that punishment-based training is less effective than rewards-based training.

According to Animal Welfare, using punishments is less effective than using rewards. In this study, researchers observed that dogs were only obedient to tasks that used positive rewards.

For a dog whistle to be effective, it relies on being an aversive. Aversives refer to an unpleasant tool that owners use in training. Aversives can range from stern scoldings to spanking and shock collars. On the other hand, dog whistles may not even be effective at all.

Punishment-based training is not only less effective but it increases problematic behavior.

This was observed by Applied Animal Behavior Science. Researchers found that owners who used punishment-based methods had dogs that had more anxious and excitable behavior. This shows that punishment does not lessen problematic behavior but achieves the opposite.

Ignores The Root of The Problem

Unwanted behavior is a behavior for a reason. In the case of excessive barking, barks are the main way our pets communicate with us. Without the ability to vocalize, pets will resort to other means to communicate their needs. This is why dogs that are punished can sometimes develop problematic behaviors instead of being obedient.

Should You Use A Dog Whistle?

However, this doesn’t mean that dog whistles don’t affect cats negatively. Studies have shown that cats instinctually hide their pain, and they are good at doing so. Even if whistles were to harm cats, we might not know until it is too late.

Of course, there are much worse things that can happen to cats. Illness and disease can cause pain that is much worse than that of a whistle. However, stress and anxiety are pain that we shouldn’t inflict on our cats if we can avoid them.