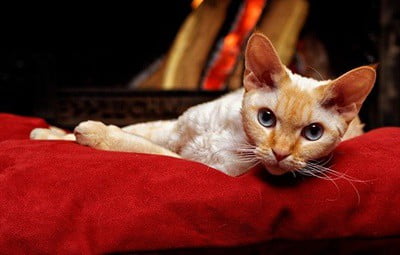 Humans know that fire can be destructive. We understand that close contact with flames causes pain, which is why we take safety precautions. However, it’s natural to wonder if cats are mindful of the dangers of fire.

Cats are aware that fires can be dangerous, so they’ll stay away from open fires that emit sparks and embers. However, cats do lounge near lit fireplaces to keep themselves warm, especially during cold weather. Other times, their curious nature will attract them to flaming objects, such as candles and hot stovetops.

If you have a fireplace or like to light candles in your home, be wary about your cat getting too close to fires. Otherwise, the cat may accidentally burn itself or find its fur singed by the embers that flick out. Cats should be kept away from wood-burning stoves and candles as they can still get hurt or knock the candle over.

Table of Contents show
1 Do Cats Know Fire Is Dangerous?
2 Do Cats Know Not to Touch Fire?
3 Do Cats Know What Fire Is?
4 Can Cats Sense Fire?
5 How Do Cats React to Fire?
6 How to Keep Cat Out Of Fireplace
6.1 Supervise Your Cat around a Lit Fireplace
6.2 Don’t Allow Your Cat to Play Near the Fireplace
6.3 Install a Protective Metal Screen Around Your Fireplace
6.4 Ensure the Hearth is Uncluttered
7 Will Cats Stay Away from the Fireplace?
8 Are Wood Burning Stoves Safe For Cats?
9 Do Cats Know to Stay Away From Candles?

Do Cats Know Fire Is Dangerous?

Cats understand that getting too close to fires causes pain and discomfort. For this reason, they tend to keep a safe distance from open fires.

However, some cats may approach flickering fires out of curiosity. You should avoid letting your cat play near an open fire without supervision.

Do Cats Know Not to Touch Fire?

Cats know that touching an open fire, such as a candle or stove, can cause pain. So, they stay away from open fires.

However, cats like to bask near fireplaces to keep themselves warm during the winter season. While it is okay for your cat to relax near a fireplace, you should watch it to ensure it doesn’t get too close to the fire.

If left unsupervised, a curious cat might get burnt accidentally. This will not only cause severe injuries but also increase the risk of house fires.

Do Cats Know What Fire Is?

While it’s unclear whether cats can see fire the way humans can, they certainly know what fire is.

If you’re like most pet owners, you’ve probably observed your cat staring directly into a fire. This indicates that cats can see the fire.

Cats have a wider field of vision than us. While we have a 180-degree field of vision (which allows us to see objects in front of us and to our sides), cats have a 200-degree visual field. This lets them see things slightly behind them.

Despite this, cats don’t have a high level of saturation in their vision as humans do. High saturation allows us to see the world in vibrant colors. For cats, colors are much duller, and certain hues may even be imperceptible. This means cats may not see the colors of fire as we do.

Nevertheless, cats understand that close contact with the flickering embers emitted by open fires can cause pain. This prompts them to keep their distance from fires.

Cats also have heat sensors around their face that enable them to detect sources of heat. So, they can tell when they are too close to a hot object.

Cats can sense fire by observing the flickering flames. According to the Journal of Physiology, they have heat sensors around their faces (nasal area) that signal them when they approach a source of heat.

Cats will avoid getting too close to fire or any heat source since they know it can lead to pain and discomfort.

How Do Cats React to Fire?

Cats tend to stay away from open fires to prevent hot sparks and embers from falling on their bodies.

However, due to their curious nature, these felines often approach candle flames and other less threatening hot objects, such as stove tops, in a bid to investigate them.

How to Keep Cat Out Of Fireplace

As mentioned, cats are aware that fire can be dangerous. As such, they often keep a distance from them.

However, they sometimes lounge too close to fires, either to keep themselves warm in cold weather or out of curiosity. It is important to realize that leaving your cat near a fireplace without supervision can cause burns and injuries.

Moreover, your cat may accidentally knock trinkets into the fireplace and create a fire hazard in your home.

Here are ways to keep your cat out of the fireplace:

Supervise Your Cat around a Lit Fireplace

Only light up a fireplace if you can keep an eye on your cat. While it’s okay for your cat to warm itself near a fireplace, you do not want it getting too close and accidentally setting its fur on fire.

By supervising your feline around the fireplace, you will be able to see when it gets too close and shoo it away.

Don’t Allow Your Cat to Play Near the Fireplace

Cats usually get carried away when they’re in the middle of play. Allowing your cat to play too close to a fireplace is potentially dangerous since it may accidentally catch fire on its fur or tail.

It may also inadvertently knock objects into the fire, thereby causing a fire hazard. To avoid these scenarios, ensure that your cat plays at a safe distance from a lit fireplace.

Install a Protective Metal Screen Around Your Fireplace

Having a protective metal screen around your fireplace provides an added layer of protection for your pets.

Some cats like to lounge next to open fires, which puts them at a high risk of getting burnt if embers fall on their fur. Installing a protective metal screen prevents the embers of open fires from reaching your cat’s fur.

Ensure the Hearth is Uncluttered

Before lighting a fireplace, remove all clutter to reduce the chances of fire accidents.

Get rid of any flammable items around the fireplace, including any soft furnishings that your cat might want to lounge on. Also, be sure to remove any objects that may be knocked into the fire by accident.

Remember, even with safety precautions, it is possible for your cat to accidentally catch fire. So, you should always keep a fire extinguisher nearby to put off any accidental fires that could pose a hazard to your family, pets, and home.

Will Cats Stay Away from the Fireplace?

Most cats like to sleep in front of a fireplace or radiator during cold weather to keep themselves warm.

The embers and sparks emitted by a lit fireplace are also attention-grabbing for cats. So, they tend to lounge close to fireplaces. However, when the flames start getting too big, cats will sense danger and move away.

Most people believe that it’s safer for a cat to be around a wood-burning stove rather than an open fireplace.

This is because, unlike fireplaces, wood-burning stoves come with featured doors that keep the flames contained.  Furthermore, they prevent the embers that are spat out by the fire from falling on your cat’s fur.

Despite these advantages, wood-burning stoves can still be dangerous to cats. Considering the curious nature of most cats, a feline can jump onto the stovetop without realizing how hot it has become. This can cause serious burns to your cat’s paws, not only causing pain but also impacting its ability to walk.

To keep your cat away from your stove, get a gate and place objects on the stovetop.

Do Cats Know to Stay Away From Candles?

As highlighted earlier, cats tend to be curious about fire and can often be seen staring directly into open flames.

The flickering flame of a candle can easily capture the attention of your cat and lure it to come closer. In most cases, cats won’t attempt to touch the flame of a candle, particularly if it has been burned in the past.

There is a risk that the cat may knock over the candle and cause a fire. Statistics from the National Fire Protection Association reveal that household pets such as cats are responsible for about 750 house fires in America every year.

Given the risk of pet-related fires, you need to take the necessary steps to prevent your cat from accidentally causing a fire. You may start by getting some flameless candles, which contain light bulbs instead of open flames. This removes any risk of fire in case they are knocked over by a cat.