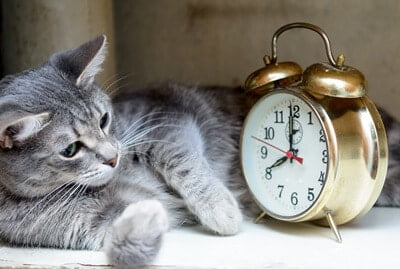 Cats thrive on daily routines. So, they’ll expect to be fed, fussed, or played with at the same time each day. If you deviate from a routine, it causes cats distress. Despite how it seems, cats aren’t checking the time on a clock.

Cats have circadian rhythms. This 24-hour sleep-wake cycle enables cats to determine the time of day through sunlight and darkness. Cats can also memorize patterns associated with time. Internal cues will be back-chained, meaning that a sequence of events must happen in the right order for it to be the correct time.

Cats are crepuscular animals, meaning that they’re most active between dawn and dusk. How cats verify the time of day is completely different from humans, but a cat’s internal clock can be surprisingly accurate and reliable.

Table of Contents show
1 Do Cats Have a Concept of Time?
1.1 Waking in the Morning
1.2 Owner Schedule
1.3 Roaming
1.4 Play and Mealtimes
1.5 Grooming
1.6 Elimination Schedule
2 Do Cats Know What Day of the Week it is?
3 Do Cats Know When it is Nighttime?
4 Do Cats Experience Time Differently?
4.1 Do Cats Have a Sense of Time When You Leave Them?
4.2 Do Cats Perceive Time Slower?

Do Cats Have a Concept of Time?

Felines adhere to a routine based on the human clock. A cat will conduct certain activities and demand that its needs are met at set hours. So, how do cats tell time?

Your cat is not reacting to the time but its environment. As stated, the most important of these is a cat’s circadian rhythm, which governs the body’s reactions based on the rising and falling of the sun.

Humans are diurnal, so we are active by day and sleep by night. The Journal of Physiology explains that this is a naturally occurring phenomenon. Our bodies are conditioned to wind down at dusk and start stirring again at dawn.

Cats are also governed by the sun. In addition, cats memorize patterns and routines in their surroundings. Sights and sounds provide cats with an understanding of the time. As cats rely on routine, this influences their daily behavior.

Waking in the Morning

Your cat likely wakes up at the same time each morning. It’s not uncommon for a cat to wake you at this time, almost like clockwork. This may seem odd, as a cat does not have an alarm clock.

Cats are crepuscular, so their bodies are genetically hardwired to be wide awake at daybreak. This is why your cat wakes you up at the same time each morning with loud meows asking for food and attention.

Naturally, this waking time varies with the seasons. During the fall or winter, the sun will rise later. A cat’s circadian rhythm will dictate that it awakens later as a result. The cat will usually be active just before its owner.

Cats seem to know when you’ll arrive home. It’s common for a cat to be waiting for an owner at the door, suggesting that the cat knows exactly what time to expect you.

Your cat will have memorized certain cues that precede your arrival. For example, you may have neighbors that arrive 15 minutes before you. The cat will hear them come home and know that you will arrive home before too long.

Other sounds may help your cat to anticipate your movements. Cats do not count in a traditional sense, but they can memorize patterns of sound. If a bell or clock chimes and you return soon after, a cat will anticipate your arrival.

You may find that your cat goes for a walk at the same time every day, which will also be linked to the cat’s circadian rhythms. The cat will understand when the sun is most comfortable and will venture outside.

Cats remember things that matter to them. For example, your cat may memorize when a butcher or neighbor throws out unwanted food. This schedule, similar to anticipating your return, will be built around visual or audible cues. The cat will ensure that it times a visit to that location appropriately.

Your cat will also look to memorize the routine of other animals so that it can stay safe while it hunts or claims territory. If it has a feline friend, it may time roaming to coincide and play.

The cornerstone of any feline schedule is established play and mealtimes. If you’re late with dinner, your cat will let you know. How do cats know when it’s time to eat? Again, this relates to your movements.

A cat will come to expect certain routines. You will likely follow certain rituals upon getting home. You may take a shower, change your clothes, then play with and feed your cat.

The cat will wait patiently while you attend to your own needs. Once this is complete, it expects your undivided attention. Again, this is not connected to the clock. Rather, the cat is basing its understanding of time on your actions.

Grooming is unconnected to the clock, but rather sleeping and eating. Cats can spend up to 50% of their day grooming. Typically, they do so immediately before and after eating and sleeping.

By cleaning itself, the cat is removing any trace of its scent. This means it feels safe from predators while dozing. This is also why cats groom after eating. They are removing food smells.

Most cats will fall into a routine of eating and sleeping at set times. This, in turn, will lead to an equally structured approach to grooming. If your cat grooms at random and frantically to excess, this implies distress.

A cat that uses its litter tray at the same time each day suggests that it has established a comfortable, reliable routine. For a cat to eliminate, it needs waste to pass. For a cat to poop to a schedule, it must also eat to a schedule.

Do Cats Know What Day of the Week it is?

Garfield, arguably pop culture’s most famous feline, claimed to hate Mondays. In reality, a cat cannot tell Monday from Thursday. A cat’s understanding of the Gregorian calendar is similar to the clock.

Just as cats understand time through routine, the same applies to days of the week. Assume that you work a traditional 9-5 working pattern, Monday through Friday. Your cat will eventually learn to expect when to see you.

In addition, cats may understand a day of the week based on visitors to a home. A cleaner that attends once a week, for example, will become expected. Cats will memorize the pattern of when this house guest arrives.

Do Cats Know When it is Nighttime?

As cats often look out of the window, they will know when night falls. Indoor cats are used to artificial lighting and will also notice a sudden drop in temperature.

Cats prefer to sleep during the day, while the sun is highest. As cats’ body temperatures are lower while they sleep, the sun’s rays keep it warm and comfortable. What’s more, common feline predators and prey are nocturnal, so many cats prefer to remain alert at night.

Cats recognize the onset of night. The cover of darkness offers a chance to explore and roam. While humans sleep, the home or streets become quiet, allowing cats a chance to hunt without sensory distraction.

You may find that your cat sleeps at night, partly because cats are natural imitators. Many domesticated felines, especially indoor cats, fall into step with an owner’s schedule.

People often refer to “cat years” when describing the passage of time for a feline. The popular belief is that one cat year equals 4 human years. Be aware that this is strictly a theory with no scientific foundation.

With this in mind, you may believe that time feels shorter for cats. We must remember that cats have no frame of reference, though. They don’t wonder how fall is coming when it feels like spring has just ended. Cats live almost exclusively in the moment.

As a result, cats do experience time differently. They are not constantly looking at the clock or calendar. Cats do not have appointments to keep or time-sensitive errands to run. Instead, cats focus on feeling and instinct.

A cat’s experience of time evolves around whether it is hungry, sleepy, or cold. If it feels something undesirable, the cat will react. Beyond this, felines take each moment as it comes.

Do Cats Have a Sense of Time When You Leave Them?

Every cat is different. Some cats appear to experience chronic separation anxiety when apart from their owners. Others appear largely indifferent. A study in PLOS One reveals differences in feline behavior based on time apart.

14 cats were left alone in the house for periods of 30 minutes and 4 hours or more. The cats did not display any marked differences in behavior while alone. Upon the return of an owner, slightly different actions were noted.

Can cats tell how long you are gone? Based on this study, it would appear so. This makes it important to recognize the symptoms of separation anxiety. Common warning signs of this include:

Separation anxiety suggests that a cat is not securely bonded to an owner. The cat does not believe that the owner will return and meet its needs.

Scientific American Mind claims that “small animals live in a slow-motion world.” This is due to the perception of time through vision. The speed eyes send messages to the brain is linked to an animal’s metabolic rate. The smaller the animal, the slower it sees time unfold.

This suggests that cats experience time slower than humans. This is untrue as cats see time unfold slightly faster than humans. All animals process light by Hz per second. The higher the number of Hz, the slower time appears to move.

Humans process roughly 60 Hz of light per second. Cats, meanwhile, experience light at 55 Hz per second. Rodents, conversely, process light at 39 Hz per second. This is why a hunting cat can be left frustrated by a fleet-footed mouse.

This explains why cats move at a leisurely pace but enjoy rapier-sharp reflexes. A cat’s eyes send visual messages to the brain faster than our own. This helps cats to act instinctively, especially when feeling threatened.

Cats immediately respond to visual stimuli, usually without thinking. Events unfolding on a television screen, for example, appear as rapidly flickering images. Catching sight of something from the corner of the eye can spook a cat.

Do cats understand time? Cats are not slaves to time like humans but they do have an understanding of time based on a consistent routine. By remaining consistent with your cat’s schedule, it will learn to associate certain times with events that it deems important, such as dinnertime.