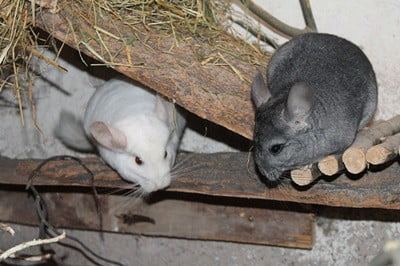 Native to the Andes Mountains of northern Chile, a chinchilla is a long-furred rodent. Despite being an exotic pet, it’s a popular companion in many homes. However, it doesn’t always pair well with existing pets. You may be concerned if a chinchilla and cat are compatible.

Cats don’t get along with chinchillas as they see them as prey animals or toys to bat around. Meanwhile, chinchillas view cats as large, scary animals and feel anxious around them. They should be kept separate at all times and only interact with supervision.

Cats and chinchillas cannot play together as this would only result in injury or death for the chinchilla. Properly introducing the two animals is important if they’re to live in the same home, as this will ensure the cat doesn’t frighten the chinchilla.

Are Chinchillas Good with Cats?

Chinchillas aren’t good with cats. Even having a cat in the same room can leave a chinchilla stressed and anxious. In this event, it’ll likely refuse to eat or drink, which can make it ill.

If the cat doesn’t view the chinchilla as a toy, it’ll assume that it’s prey. Chinchillas are a species of rodent that are the natural prey of cats. Likewise, they’re small animals, and cats are known to prey on many creatures that are smaller than themselves.

Can Chinchillas Be Friends With Cats?

Chinchillas and cats will never be friends. The most you can hope for is the two animals ignoring each other and peacefully coexisting. This, in rare cases, may allow the two to smell each other, sit near one another, or even have the chinchilla sit on top of the cat.

However, while internet pictures and accounts of this exist, it’s rare. The best you can hope for is the cat ignoring the chinchilla. Likewise, you may achieve a situation where the chinchilla can see and smell the cat from a safe distance without being stressed.

Will Cats Play With Chinchillas?

Cats should never be allowed to play with chinchillas. There’s no cross-over between how these two animals play, so they will be incompatible playmates. More to the point, cats are likely to harm or even kill a chinchilla while attempting to play with it.

This is because of the following reasons:

Cats will wrestle, scratch, and bite at one another while playing. Although they gauge their strength to not be harmful to other cats, this doesn’t matter when it comes to a chinchilla.

A single bite could prove fatal to a small rodent. Scratching and hooking with a cat’s claws could inflict serious injuries. Even the weight of an adult cat alone could injure a chinchilla and cause it serious harm.

The chinchilla would have no way to defend itself from the cat or play similarly. Instead, it would be harmed by the cat, and the cat would walk away unscathed.

Because of this, you should never let your chinchilla and cat play or even interact unsupervised.

Are Chinchillas Scared Of Cats?

Chinchillas will be frightened of cats since they are predators and chinchillas are natural prey.

According to Mammalian Species, chinchillas are hunted by:

There are times when large cats kill wild chinchillas. Some skunk and fox species also resemble cats in appearance, which could activate a chinchilla’s instincts to flee. Unfortunately, running away is likely to engage a cat’s instincts to chase and pin the chinchilla, resulting in injury.

According to Nature Communications, domestic house cats retain their hunting instincts and are dangerous to local wildlife. That carries over to interactions between a chinchilla and a cat.

It’s best to trust the chinchilla’s better judgment in this situation. It has every reason to fear a cat and should not be forced to interact.

Can Cats Live With Chinchillas?

Cats and chinchillas can live in the same house together. However, it’s advised that you always keep them separate and only allow them to interact (if at all) with your strict supervision.

It’s even better if you hold the chinchilla at all times and don’t let it approach the cat. Cats have sharp reflexes and may attack and even kill the chinchilla before you can intervene.

With that said, a quick internet search reveals pictures and videos of chinchillas and cats peacefully spending time together. You may find shots of chinchillas sitting on top of cats or cats curiously approaching chinchillas, and this proves that the two can live together peacefully.

This mostly depends on the cat. Docile cats that are older, hand-tamed, and well-fed may be less likely to bother a chinchilla. Likewise, cats that grow up around small mammals may be able to fight their hunting instincts and adapt far more easily to having chinchillas around. So, the best approach is to raise the two animals together.

These events are rare. Even if your cat and chinchilla are happy together most of the time, it only takes one moment for a cat to end this in disaster.

How To Introduce Cats To Chinchillas

It’s best to introduce chinchillas and cats when they’re still young. This will allow the two to grow up together, thus becoming more acclimated to one another’s presence.

There are steps you need to take when introducing them:

1/ Keep Them In Separate Rooms

When you first bring home either the chinchilla or the cat, keep them separate. Give either animal time to settle in by itself and become comfortable before you introduce another animal.

In the following days, avoid housing the cat or chinchilla together in the same room. If you have the space, keep the chinchilla in another room that can be closed off from the cat. This may include a bedroom or a bathroom if you live in a studio apartment.

If your cat free roams, keep a close eye on it to ensure it never enters the chinchilla’s room, especially in the first couple of days. This will only stress out the chinchilla and make it more prone to reacting in fear. Avoid this because associating the cat with terror will make future introductions harder.

2/ Allow Them To Smell Each Other

Through the cage bars or under the door, allow the cat and chinchilla to smell each other. This allows the two animals to become acquainted with each other’s existence and learn each other’s scents.

That will teach the cat that a new animal is in the home and gradually warm up to its presence. It’ll also give the chinchilla a chance to learn about the cat in a safe, calm environment.

3/ Hold the Chinchilla While Introducing

After multiple smell tests, you can introduce the two to each other. Just be sure to hold the chinchilla firmly while you do. If possible, have another person hold the cat to prevent it from making any sudden movements.

Keep the chinchilla and cat several feet apart, and allow them to see and smell each other. Speak in a calm, firm voice and assure each of them that this is an okay interaction.

4/ Watch for Aggression or Fear

In cats, aggression often manifests as hissing, hunched posture, or batting with claws.

In chinchillas, fear may result in squeaking, scrambling to get away, and scratching. If you notice any of these signs in your pets, separate them. Try again once both have calmed down again.

5/ Separate If the Cat Misbehaves

Your biggest concern will be the cat. If it attempts to lunge, bite, scratch, or bat at the chinchilla, then be sure to separate the two.

You should firmly correct the cat and tell it that this isn’t acceptable behavior. Once it’s calmed down again, try reintroducing the chinchilla. If the behavior persists, then stop the introduction for the day.

6/ Keep Introduction To A Few Minutes

You’ll know it’s gone well if the two animals smell, see, and observe each other, then move on to ignore one another. This is a peaceful interaction and exactly what you’re aiming for.

Keep the introductions to a few minutes at a time, and let the animals take a break. Too much exposure could make the chinchilla and cat react poorly because they want to leave now and aren’t allowed to.

If you must let the chinchilla out of your hands, only do so after several weeks of successful introductions.

This will help reinforce that the cat and chinchilla shouldn’t react with aggression or fear, which lowers the chances of one harming the other when the chinchilla is out of your hands.

However, you must always strictly supervise the interactions. You should also be prepared to snatch up the chinchilla at a moment’s notice. The best possible approach is to not allow the chinchilla out of your hands while the cat is around.

Can Chinchillas Get Fleas From Cats?

Chinchillas are known to be resistant to fleas due to their dense fur. With that said, fleas and similar insects can penetrate the thick layers, but this will take more time, so it’s unlikely that your chinchilla will catch fleas from the area right away.

However, if your cat has fleas, lives nearby, and struggles with fleas long-term, your chinchilla can pick them up.

If fleas crop up in your household, be sure to treat them right away. It’s difficult to eradicate fleas from a chinchilla for the same reasons that make it resistant to them.

Few flea treatment options are available for chinchillas, making the task more difficult. Be sure to treat your cat right away and cleanse your home appropriately.

Cat and Chinchilla Living Together Tips

Here are some tips for allowing your chinchilla and cat to live together:

Cats and chinchillas can live together in the same house, but this will take oversight on your part. In general, they don’t get along and are predators and prey in the wild.

1 thought on “Do Cats Get Along with Chinchillas? (A Compatibility Guide)”