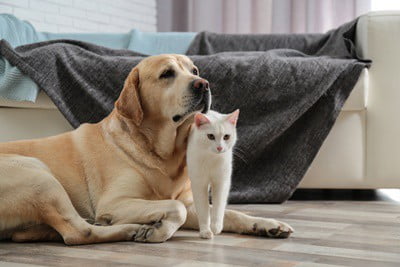 Cats and dogs don’t usually like each other, but there are exceptions to the rule. Due to their friendly and placid nature, golden retrievers and cats like each other.

Cats get along with well-trained golden retrievers. These dogs are intelligent, can be trained to a high standard, and are respectful. They treat cats like members of their pack. Poorly-trained goldies can chase cats, which cats obviously don’t like. Goldies can also be too playful for cats.

Golden retrievers are one of the best dog breeds to keep with cats. Your behavior and how you train your pets can make a huge difference. We’ll look at why golden retrievers and cats may fight and how to introduce them.

Do Cats Get Along with Golden Retrievers?

Cats are aloof animals that can have trouble getting along with new household pets. Not surprisingly, cats can have a hard time bonding with certain breeds of dogs.

Treat a cat with respect, and it will like you back. The same applies to golden retrievers and cats. If the golden retriever constantly chases the cat, barks at it, and makes it uncomfortable, your cat won’t like it.

But if the dog is respectful of your cat, the cat won’t mind it. Over time, your cat can even become friends with the golden retriever. They may enjoy spending time together, cuddling, and playing. But this trusting relationship takes time to build between two different species of animals.

Cats are naturally wary of dogs because they are a potential threat. Most dog breeds are bigger than cats, and if a large dog wanted to, it could easily kill a cat. So, it makes sense that a cat would be wary of a large-sized dog.

Cats also have different personalities from dogs. While cats can sometimes be playful, they aren’t as playful as dogs. Cats spend more time relaxing, while golden retrievers need to be more active. These fundamental personality differences can cause fighting, such as when a puppy wants to play with a cat that just wants to sleep and relax.

Also, dogs and cats don’t easily understand each other. A golden retriever can chase a cat for fun and entertainment. However, the cat might not understand that the dog is only playing and will feel frightened. Fortunately, these aren’t common problems because golden retrievers are among the best dog breeds to keep with cats.

Golden retrievers are friendlier dogs than most. They are good family dogs that get along well with other pets and children. They aren’t an immediate danger to your cat, although this depends on how well trained your dog is and how friendly your cat is.

Whether your dog will like your cat depends on your behavior. If you treat your cat with kindness, your dog will likely do the same. The main issue with retrievers is that they like to chase and fetch. According to the Golden Retriever Club of America, they were originally bred in Scotland for hunting parties. Dogs of all kinds enjoy chasing animals smaller than them, but retrievers especially so.

This can be an issue if your dog isn’t well trained. But by reinforcing good behavior and keeping your pets apart most of the time, you can avoid this issue. Golden retrievers can be well trained, so if you put in the effort, your goldie will get along with your cat.

If you want your cat and golden retriever to get on well, you must understand your dog’s breeding history and personality. By doing so, you can curb the worst of your dog’s tendencies so that your cat will be more comfortable.

Golden retrievers were bred as hunting dogs. They were specifically bred to run and get (‘retrieve’) shot birds for hunting parties. While they have been kept as pets for a long time after this, these instincts remain. As such, most golden retrievers have similar personalities as they:

What this means is that your dog will want to chase your cat, especially if it is a puppy. But as golden retrievers can be trained, you can stop this from being an issue.

How Well Do Cats and Goldies Get Along?

Golden retrievers can bond with cats. According to the American Kennel Club, they are known to be friendly animals. They aren’t skittish, so even if your cat doesn’t like your dog initially, this shouldn’t be a problem.

Because golden retrievers are smart, they learn about family dynamics quickly. Your dog will definitely notice how you treat your cat. It will notice that you treat it like another member of the pack, so it will learn to do the same over time. Your cat and dog learn how to communicate effectively together.

Your dog will happily spend time sat with your cat. In some cases, they can get along well and even cuddle. Owners report that they can be friendly and enjoy spending time together.

Do All Cats and Goldies Get on Well Together?

Most golden retrievers have a similar temperament. Dog breeds have specific personalities, which aren’t totally unique, but broadly apply. Golden retrievers are mostly friendly and gentle dogs, so most of them will get on well with cats. However, this doesn’t apply to all goldies.

While this chasing isn’t intended to be threatening, your cat won’t understand. It will think that the dog is chasing it for real. This will cause your cat to grow to dislike your golden retriever because it perceives it as a threat.

It can take 1-2 years for a cat to warm to a puppy golden retriever. Over time, your dog will calm down, and your cat will get used to it. There’s little you can do other than keep the pair apart as much as possible because all golden retrievers take time to become calmer pets.

The dog needs to learn by example. A golden retriever that lived with a family with a badly-treated cat may not respect cats, chasing them off. It’s not easy to overcome what the dog has learned. That being said, the majority of golden retrievers get along well with cats.

Golden retrievers are unlikely to attack cats. They are most excitable when they’re puppies. While young, the golden retriever’s personality shines through, but it hasn’t yet learned when it’s appropriate to chase other animal companions. Even then, its instinct is more to play than to attack.

If you train the puppy well, it will understand that it shouldn’t attack cats. However, if your cat encounters a golden retriever that isn’t well trained and hasn’t ever lived with cats, it could be attacked.

That being said, cats can defend themselves well. Even though dogs are bigger and stronger, a cat’s claws are sharper. No dog likes getting scratched. Scratches like these are enough to deter most dogs from attacking.

While cats can defend themselves, goldies are medium to large dogs and can overpower cats. According to AJHG, dog breeds’ behaviors are at least partly dictated by their genes.

How to Introduce a Golden Retriever to a Cat

How well your dog and cat get along can depend on how you introduce them. If your cat has never met a dog before, its instinctive reaction will be negative. Your dog may also have strong chasing instincts when it first meets a cat. So, to get your cat and golden retriever used to each other, follow these steps:

Give Both Pets Space

Before introducing your golden retriever and cat to each other, give them their own space in your house. Have a room that the cat is allowed in, and the dog isn’t. Also, have a room the dog can stay in but not the cat.

It has to feel at home. If your cat doesn’t like your dog, it will need somewhere it can go to get away from it to feel secure. The same applies if your golden retriever doesn’t like your dog. It may be a good idea to keep this rule in place even once you’ve introduced your pets. But if the pair get along well, it won’t be necessary.

Don’t put both of your pets in the same room. Introduce them gradually so that the two can get used to each other. Here’s how:

This prevents either pet from freaking out when it meets the other for the first time.

Keep Your Dog on a Leash

When you put your dog and cat in the same room for the first time, manage the situation by keeping your golden retriever on a leash. You can use your dog’s regular leash for this purpose.

The idea is that if your dog reacts adversely to your cat, you can quickly pull it away. This will prevent the pair from fighting and becoming enemies of each other.

If the pair do try to fight, pull the dog away while sternly saying ‘No.’ You can try another day. Other than that, teach by example. Treat both animals well, train them, and your cat and golden retriever should get along well.