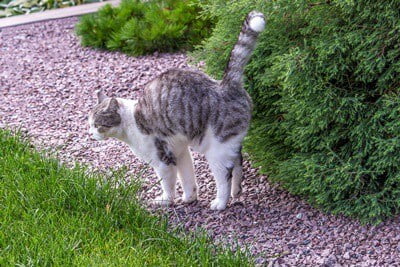 It makes sense that cats spray urine to mark territory and find mates. However, why a cat would shake its tail but not release urine doesn’t have an immediately obvious explanation.

Cats pretend to spray when they haven’t been taught how by their mothers or other cats when kittens. If a mother doesn’t teach her kittens how to spray with urine, they’ll phantom (fake) spray. This behavior is commonly observed in neutered and non-neutered males and females.

Fake spraying can be a sign of stress and anxiety, so you need to find out why your cat is phantom spraying. Of course, many explanations relate to cats’ social behaviors.

What Is Fake Spraying in Cats?

Phantom spraying is where the cat does everything associated with spraying, aside from producing urine.

Spraying is a common feline behavior. The cat will stand with its back toward a vertical surface, such as a wall or tree trunk. It’ll raise its tail, which will appear to quiver or vibrate.

It may stand, appearing to march in place for a while with its front legs moving up and down. It’ll spray urine on the vertical surface it’s standing next to. A cat may skip the marking stage.

Mammals use urine to mark and claim their territory. As the cat goes about its day, it may sometimes spray to reinforce territorial boundaries.

Other cats will smell these boundaries and stay away. However, scent marking is also used for finding mates.

Why Do Cats Phantom Spray?

We need to understand why cats phantom spray rather than release urine. The purpose of spraying is to mark territory and find a mate, so it would seem that phantom spraying serves no real purpose.

Cats learn social behaviors from each other. Kittens in a litter don’t just learn to open their eyes, walk around, and navigate the world. They also learn how to interact and communicate with other cats from their mother.

For example, kittens will learn to groom themselves and each other by watching their mothers do so. They’ll learn how to play fight and how to hunt prey.

According to PLoS One, spraying is a normal social behavior. If a kitten sees its mother spraying, it’s likely to copy this behavior. The kitten may also copy the behavior of cats that spray outside your home.

It’s unclear why the kitten will learn to fake spray rather than spray urine, but it seems likely that the mother doesn’t spray either.

House Cats May Not Need to Spray

Spraying is a behavior that cats need to do when living in the wild. If a cat can’t mark its territory, it’ll have nowhere to sleep or hunt that’s safe. It’ll also make it difficult to find a mate.

This means that cats that phantom spray in the wild may struggle to pass on their genes or survive, which is why all species of cats learn to spray. According to Nature, lions spray for this reason.

For house cats, spraying isn’t a pressing need. House cats don’t need to hunt for food because their owners provide sustenance. If a cat lives alone, it doesn’t need to mark territory because there are no other feline rivals. Spayed/neutered cats don’t need to find mates, and stud cats are matched with mates by people.

Anxiety can lead to many unusual behaviors, including spraying. That’s because stress is linked to feelings of insecurity in an environment.

For example, consider moving home. Cats find moving home stressful because they view their homes as their territories. A cat can smell its scent throughout its house, which is comforting because it feels secure.

Moving to a new home changes everything that your cat knows. A cat is suddenly thrust into an unfamiliar environment where it no longer feels safe because the house doesn’t have any traces of its scent anymore.

The cat has to rectify that situation, and one way of achieving that goal is by spraying. If the cat doesn’t know how to spray with urine, it’ll just fake spray when stressed.

Spraying is a common behavior in male cats that haven’t been neutered. That’s because non-neutered male cats are more concerned with finding territory and a mate.

However, neutered male cats will still spray, too. If they never learned how to spray with urine, they’ll choose to phantom spray instead.

Despite spraying being associated with male cats, female cats may also spray.

A female cat may have learned the habit of spraying from watching other cats. As discussed, cats learn social behaviors from their parents and other cats when they’re young.

Besides, spraying and marking territory is important to female cats as they need territory to live safely and hunt in the wild. Spraying in female cats is more common when the cat is in heat, so spraying helps with finding a mate, just as it does in male cats.

Why Does My Cat Pretend to Spray on Me?

It’s rare for a cat to spray another cat or person. Usually, cats will spray at nose level on a vertical surface of some kind.

This allows other cats to find the spray and sniff it easily, which is its purpose. Spraying another cat or person doesn’t seem to fulfill this purpose, so why do cats do it?

You Are a Vertical Surface

You are much taller than your cat, so your height may trigger a cat’s instinctual spraying reflex.

Cats will spray on trees, lamp posts, and walls. They do so without thinking about the surface because it’s inconsequential. It only matters that the cat can spray at nose height where other cats can smell it.

Cats Spray on Other Cats When Fighting

In rare circumstances, a cat may spray on another cat when the pair are fighting. The purpose is to display dominance, and it’s almost as if the cat is marking the other cat as its territory.

This behavior is not atypical, but it’s unusual. Your cat is unlikely to do this to your leg unless you make it feel very stressed or uncomfortable. It’s an unlikely behavior, but it can sometimes happen.

2 thoughts on “Why Does My Cat Fake Spray? (Phantom Spraying in Cats)”