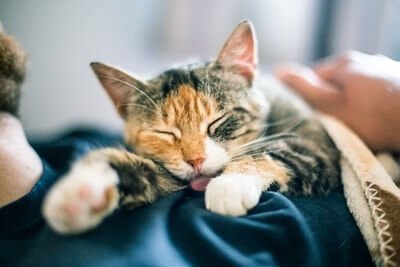 Cats have lived alongside humans for thousands of years before becoming domesticated pets. As descendants of the African wildcat, cats have since evolved to rely on humans for survival. We’ve always been fascinated by whether cats can tell men and women apart and if they prefer a certain gender.

It’s unlikely that cats can tell the difference between men and women. Cats don’t see us as humans, just large and clumsy cats. Most cats adopt us as mothers, regardless of gender, and display the same behaviors around us as they do around other cats. Cats can sense human hormones, including pregnancy hormones and pheromones, but they use them to determine information about our mood, not our sex.

While more studies are needed to provide a concrete answer, it’s clear that cats form strong bonds with both men and women. Cats respond to positive behaviors, and any human that shows generosity and kindness is likely to receive the same positive reaction from cats.

As reported by the Journal of Vision, 12 domestic cats were assigned a human handler, who worked with the animal for 2 hours a day for 6 months. As part of their training, the cats had to choose between 2 images to earn a reward.

While cats didn’t have any difficulty recognizing animals they lived with, they only recognized humans 54.5% of the time. This suggests that cats can’t tell gender by just looking at faces.

Instead, they require other stimuli to tell men and women apart, such as sounds and smells.

A cat’s sense of smell is 14 times better than that of humans. Cats have 200 million odor senses in their nose, allowing them to sense a range of human hormones and pheromones, including pregnancy chemicals and menstruation.

Pregnancy is a process that only women go through. Can cats sense that a woman is pregnant? Cats are highly intuitive, and some experts believe that cats can sense pregnancy before an expectant mother knows.

However, it’s more likely that a cat’s powerful sense of smell can sense the progesterone, human chorionic gonadotrophin hormones, and estrogen that a woman’s body produces. These hormone changes can also affect the way you smell, which cats can detect almost immediately.

Of course, it’s not just hormones that cats can sense. A woman’s body heats up during pregnancy, so a cat may rub up against her to get warm and cozy. Cats will often become affectionate towards pregnant women. This may be because they can detect the child’s faint heartbeat, but it’s usually because they want somewhere warm and comfortable to rest.

Some cats pick up on behavior or mood changes. As pregnant women sleep more often, a cat will often curl up with them during pregnancy naps; an effective bonding tool for cats and humans. Cats will become wary of a women’s sad or unhappy moods during pregnancy and give their owners a wide berth.

While it’s not entirely clear whether a cat can tell the difference between a man and woman because of these pregnancy hormones, it’s clear they do recognize what makes a pregnant woman unique.

Pheromones are natural chemicals that secrete from the body. They have no smell, but they act like hormones to provoke a social response from animals of the same species.

While some cats can sniff out human pheromones, they can’t always tell what to do with the information. Human pheromones have little effect on felines, but intelligent cats can use the signals that humans are giving off to determine what a human might be feeling – whether that’s happy, sad, or fearful.

It’s widely thought that pheromones aren’t particularly useful for cats when recognizing a human’s gender, although they are useful in determining their mood. Cats use pheromones to sense fear or adrenaline in humans. This allows cats to tread with caution around their owners if they’re in a bad mood or go ahead and ask for attention.

Some cats are prone to sniffing a human’s crotch area. While this is relatively uncommon, they’re sniffing out the apocrine glands. These glands are located in the crotch area and armpits and release information about age, sex, and mood in humans.

Women who are menstruating or have recently given birth will emit distinctive pheromones that attract cats. So, when your cat sniffs your crotch, it doesn’t mean any disrespect. It is merely trying to examine your scent messages to find out more about you.

Human ovulation and pregnancy are effective ways for cats to distinguish a woman from a man. However, once again, cats can’t necessarily understand the difference between them.

Cats can detect when a woman is menstruating by sniffing for odor and hormone levels. Many cats will sniff a woman’s crotch area when she is on her period, but cats are more likely to respect a human’s personal space than other animals.

Cats can also pick up on a woman’s mood changes when she is in her menstruation cycle. Some cats will react positively to these changes, while others may seek some space from their owner.

However, menstruation isn’t a big deal to cats, and they don’t understand the concept. Most other mammals do not menstruate, so cats have no experience of this process. What cats do understand is that something is going on inside the uterus that they can’t see.

As curious creatures, they will use their advanced sense of smell to investigate further. Cats cannot use menstruation to tell women apart from men.

Men have 7-8 times more testosterone in their bodies than women do. While studies have shown that cats can smell when women are menstruating, there’s virtually no evidence suggesting they can smell male testosterone.

Therefore, we have to assume that testosterone doesn’t help a cat distinguish between men and women. Even though cats can recognize hormones exclusive to a specific gender, cats can’t tell the difference between a male and a female human. It means absolutely nothing to them.

While more research needs to be done, cats behave the same way to men and women as they do to other cats, suggesting that cats see humans as their own kin.

Can Cats Tell Men and Women Apart Through Sound?

Cats struggle to differentiate between humans by sight but can use sound to tell men and women apart.

A study conducted by Japanese researchers found that cats reacted strongly to their owners’ voices after being played recordings of their owners and strangers calling their names. While this highlights cats’ intelligence, it doesn’t imply that cats tell the difference between men and women.

What is known is that cats prefer higher-pitched sounds. Children respond to the soothing sound of a woman’s voice, and the same applies to cats. High-pitched sounds provide a cat with comfort and affection, whereas a man’s deep voice is often mistaken for anger or displeasure.

Women use more sounds to interact with their cats and do so more frequently than men. This is mainly because women have strong motherly instincts to care and nurture and are more likely to soothe their cats with sounds. Therefore, cats that enjoy affection and attention are drawn to women, creating the illusion that cats recognize their female owners because of their gender.

Some cats are afraid of men’s low-pitched voices and will avoid male company as a result. It’s common for humans to say, “my cat doesn’t like men,” but it’s not necessarily the male gender that cats don’t like. It’s the familiar sound or behavioral trait that reminds the affected cat of its traumatic past, particularly if a male mistreated the cat.

Humans love to categorize, but cats are simpler and use their instincts to protect themselves from sounds that signify danger. Cats want to survive while ensuring they receive food and affection when they need it.

Do Cats Prefer Men or Women?

Cats attach to humans as social partners, not just owners, and are looking to connect emotionally with their owners. According to a recent study, cats build closer bonds with women. This is mostly because women interact with their cats more frequently than men do. They also vocalize more often than men.

Researchers videotaped 41 cats and their owners during the study, monitoring their interactions and personalities during four different periods. What they found was that cats and owners influenced each other’s behaviors. Extroverted women were more likely to respond to subtle cues made by their cats to get attention, including small tail movements.

In turn, cats remembered the kindness given to them by their female owners and returned the favor with warmth and loyalty. As a result of the fondness shown, the cats studied approached women more often than men and initiated contact with them more frequently.

That’s not to say that cats don’t love their male owners. Your cat’s preference will come down to its personality – some animals will only respond to men. Cats that have been handled from a young age are more likely to develop close bonds with humans. Cats that haven’t are warier about the company that they keep.

Do Cats See All Humans As Mothers?

Cats view us as giant cats, not humans. Cats don’t adjust their behavior when they are around us. They purr, rub against our legs, and groom us with their tongues. This is what cats do to each other, and these behaviors suggest that cats don’t even see us as human, let alone male or female.

There are certain behaviors cats use towards humans that they would towards their mothers. The most notable is when a cat kneads your body with its paws. Study.com explains that kittens knead their mother’s breast tissue to release milk. This behavior carries over into adulthood because cats associate kneading with something good. They also view both male and female humans as their surrogate mothers.

A study published in Current Biology found that cats displayed attachment behaviors towards their owners, similar to those that babies and dogs show. These findings further suggest that humans adopt the mother role – cats can see human gender.

Cats are biologically able to tell the difference between men and women based on their scents, sounds, and visual appearance, to an extent. Cats can’t use this information to tell if they are interacting with a man or woman.