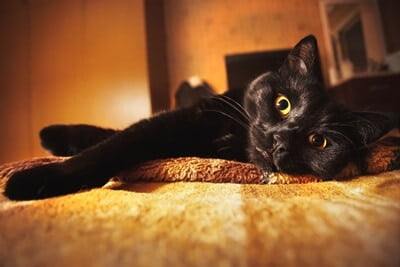 Depending on who you talk to, black cats may seem either mysteriously beautiful or scary to look at. Although you’d imagine they’re rare, given their infamy, there are 22 domestic breeds that have solid black fur. Of these 22 breeds, only one breed has exclusively solid black fur found in both male and female cats: the Bombay cat.

Black cats are present in many cultural histories. Not all of them are negative, as many people tend to believe. In fact, the black cat symbolized good fortune and good health in historical Britain, Ireland, and Japan. However, Gaels, Scot, Welsh, German, and many Western cultures do have some stories linking black cats to bad omens and evil spirits. There are even several black cats that were present during important moments in our history.

For example, Matthew Flinders, who mapped the coastline along Australia, sailed this coastline with his black cat, Trim. Hodge the black cat was owned by Samuel Johnson, a historically significant English writer. Hodge was written into Johnson’s biography, and many statues of Samuel Johnson include Hodge the cat. Oscar the black cat was one of the first cats to receive prosthetic legs by veterinary surgeon, Dr. Noel Fitzpatrick.

Aside from the Bombay cat, there are a good number of domestic cat breeds with black fur. You have a wide variety to choose from if you want to own this beautifully colored pet:

Black fur in cats is adaptive, but that can seem counterproductive. After all, black fur can attract warmth on a much higher level than lighter colors. Depending on where you live, this may be either an advantage or a disadvantage for your cat. Regardless, black fur color has evolved for generations upon generations for one main reason.

It enhances hunting capabilities. This is especially important for hunting prey in the dark. Of course, the domestication process has greatly altered the development of completely black fur in cats. That makes it difficult to track where the color shift began and where it really ended.

No matter the case, black cats are surrounded by a plethora of myths, both good and bad. One of the most predominant black cat myths is that they are inherently evil. This comes from historical associations and stories that link black cats to witchcraft, misfortune, and/or bad luck.

On the contrary, black cats can be friendlier than some traditional cat breeds. In fact, the Bombay cat has a playful, friendly, and affectionate temperament. Members of this breed can become very closely attached to their people.

What makes black cats black? Can you help your cat become an even darker shade of black? Here are scientific insights about these felines and their fur:

Black Cats Get Their Fur Color from Melanin Granules

Melanin granules are cellular structures that contain the pigment melanin. Melanin is responsible for dark brown to black coloration in the skin, hair, and eyes. According to the Journal of Heredity, black cats have numerous melanin granules widely dispersed across their fur. This gives them their rich, black coat (and in some types, a few lighter accents or patterns).

Cat Fur Color Can Be Influenced By Diet

According to the Journal of Nutrition, black cats might even change color based on their meals. Those fed a diet consisting of gelatin as the main protein source were observed to develop red-brown fur. In contrast, black cats fed a diet with a different protein source maintained their solid black coat.

It was suggested that it’s because gelatin provides 1.5 times more amino acids. These are the building blocks of proteins. As such, they triggered a series of chemical reactions that eventually resulted in increased melanin synthesis.

The Bombay cat is the blackest feline of all. So, how did it come into being? And does it have a connection to the much larger black feline, the panther?

Many people assume that Bombay cats are closely descended from wild panthers. After all, they are the only known solid-black cat breed and even look a bit like tiny panthers.

However, the evolutionary line isn’t quite that straightforward. Bombay cats were, in fact, created from 2 common domestic cat breeds. These are the sable Burmese and the black American shorthair. Both of them made ideal candidates for their coat color and fur length.

Bred In An Attempt To Create A Domestic Panther

You’re not too far off with your panther guess, though. The domestication process seems to be limitless if given enough patience. Nikki Horner was a cat breeder that lived in Louisville, Kentucky. Her goal was to create a miniature version of the wild panther.

Although her first attempt at creating the Bombay cat was a failure, she finally succeeded. This happened in 1965, around 6 years after she first began. The Bombay cat breed was not recorded or recognized by the International Cat Association, the world’s cat genetics registry, until 14 years later. This was in 1979.

Black cats make delightful pets. However, the adoption process looks a bit rocky for them.

According to Preventative Veterinary Medicine, it takes adoption shelters far longer to adopt out black cats. In comparison, felines with multi-colored coats or little black coloring are the first choice of many new owners.

This is consistent with another study that was conducted 4 years prior, in 2013. However, the results are not statistically significant, so the facts may differ depending on:

It may also suggest that more people are unlearning the association of black cats with bad luck. That’s good news for all the dark-colored felines out there, looking for homes.

These 2 holidays arose from research finding that black cats were less likely to get adopted. National Black Cat Day was first established in the United Kingdom of Great Britain and Northern Ireland. It takes place on October 27th. This holiday is dedicated to celebrating the beauty and value of black cats to encourage people to adopt them.

National Black Cat Appreciation Day is on August 27th. This holiday was established in the United States for the same reason as National Black Cat Day in the United Kingdom. Owners of black cats tend to give their black-coated felines extra love and treats on this day. It’s also a great time to purchase your own dark-colored cat from a local shelter.

There’s a long-held myth that black cat adoption during Halloween is dangerous for the cat. Supposedly, people will:

Fortunately, this was debunked by the Humane Society of the United States (HSUS). This was further proven as just a myth by the American Society for the Prevention of Cruelty to Animals (ASPCA). In fact, some shelters have begun to promote their black cat adoptees and wholeheartedly welcome potential adopters during Halloween time.

Furthermore, it is common for adoption shelters to conduct extensive interviews and screening with potential owners. This helps to determine if they are fit for owning a pet in the first place. The regulations and procedures are taken very seriously. That provides more evidence that black cat adoptions during Halloween time should be advertised broadly, not avoided.

There has also been no evidence of black cat sacrifice crimes that were linked to black cat adoptions, during Halloween or not. Therefore, Halloween time can actually benefit dark-colored felines and increase black cat adoptions. That is, as long as shelters continue to screen people and potential owners do not make spontaneous decisions.

With the success of Marvel’s superhero movie “Black Panther” in 2018, there came an increase in black cat adoptions. Many fans of both the movie and Marvel itself began to adopt black cats to honor the characters in Black Panther, even naming them after said characters.

Of course, adopting black cats for the sake of being a movie fan seemed to be a momentary fad. As such, adoption shelters carefully interviewed people that were adopting felines at this time.

Although most superstitions around black cats are untrue, they still have an influence. Here are some of the effects that black cat myths have had on people:

Mavrogatphobia Is The Fear of Black Cats

There are many historical origins of mavrogatphobia, with stories and tales spanning hundreds of years. The earliest hypothesis of a human’s fear of black cats states that our prehistoric ancestors greatly feared the saber-toothed tiger. This was a very vicious, primitive feline. As such, humans avoided them to survive because they were certainly the opposite of friendly.

During the Middle Ages in Europe (around 500 to 1400–1500 AD), there were many stories surrounding black cats. One tells of a limping black cat that made its way into the home of an injured woman. When villagers saw this woman come out of the same house and also limp, they believed that the black cat had transformed into a woman.

Other theories suggest that the dislike for black cats around this time began solely because their fur was black. This was the same belief held by people for ravens and crows, who were believed to be even greater omens of disaster. Furthermore, Italians in the 16th century also believed these domestic felines were omens of death. If a black cat rested at someone’s sickbed, it was believed that this signaled the person would soon pass.

This fear of cats worsened during the Salem Witch Trials in colonial Massachusetts. They began around February 1692 and ended the year or so after, around May 1693. Some of the women accused of witchcraft just so happened to own black cats. Many believed that these “familiars” worked alongside these “witches” to appease and serve the devil. Thus, the fear of black cats also arose because of this old association with evil.

There’s a common stigma about having black cats around. However, some cultures and stories praise the presence of black cats and have positive associations with them.

For instance, in England, it was believed that if a black cat wandered onto your ship and stayed, you were granted good luck on your voyage. This luck would be increased if you sheltered and cared for said cat very well. They were also believed to be good-luck wedding presents if given to a bride. Wives of English fishermen kept black cats in the house because it symbolized that their husbands would come home safely.

The Scots believed that if a black cat were to arrive at your doorstep, prosperity would be well on its way. People that lived in southern France believed that black cats were associated with magic and magicians. As such, feeding them and treating them well granted that person good fortune. Even hearing a black cat sneeze served as a good luck omen, at least in Italy. In Japan, black cats were symbols of:

Egyptian culture loves felines of any color most of all. In Ancient Egypt, it was believed that Bastet, the cat goddess, granted good fortune upon those that housed cats. Cats were so widely cherished and adored that it was common to mummify and mourn cats upon passing. Some would even mummify owners and cats together. It was against the law to kill cats, with the punishment being death.

Cats are beautiful, fascinating, and friendly. However, in modern times, it takes some unlearning to break any association with bad luck and omens of death. In truth, black cats are just like any other animal that wishes to be adopted into a loving home.

In fact, there is some evidence that black cats may actually outlive other domestic cat breeds. This is a credit to the gene responsible for making their fur its black color. The gene is linked to protection against certain diseases that other cats are susceptible to. Therefore, black cats have much lower chances of developing a disease or getting sick because of their genes. Consider that lucky.